The entire day was focused on saving one life, in addition to all the daily chores here at the rescue. The rescue started yesterday and has consumed our time ever since. Please get a couple boxes of tissues ready to catch the rivers of tears.

It all started yesterday afternoon, a woman named Diane was driving down a road in central California, when a horse caught her eye. It was standing in a field, all alone. He was very skinny and didn’t look healthy in the least. She turned the car around for a closer look. She almost didn’t, but something inside her head told her she needed to investigate.

She is an ammature photographer, so she took pictures and posted them on her blog and put a link on another major horse blog, hoping to get help for this horse. Deb saw the pictures and forwarded them to us at the office. Tawnee got in from showing horses yesterday to see the pictures of this sad, bedraggled emaciated horse. There had to be something that could be done.

The pictures from the lady’s blog were so heart wrenching.

Tawnee was searching for answers, looking at the horse’s pictures seeking to evaluate him to determine what help he needed. She didn’t‘ see signs of old age in his face, just starvation, but it was really hard to tell.

The poor guy, his skin was literally shrink wrapped around his bones.

His hair was falling off just by being touched. Over his body there were large portions of bare skin where his hair was just gone.

The lady looked around for signs of food. He was in a large dry pasture with lots of fox tails. The makeshift barn was empty, no signs of food anywhere.

As soon as Tawnee was done looking at the pictures she called Diane to find out more about the situation. Diane did not know who owned the horse, she had just been driving down the road and took pictures. She was eager to help, but lost at where to start. She called Animal Control’s phone #, and was transferred multiple times to different county offices. She finally left a message. Finally someone from Animal Control called her back. He stated he had been keeping an eye on the horse for about a month and they would be coming out in the morning to check on him again. She relayed all this to Tawnee, and Tawnee asked her if she would be able to go out to the property to try to find the owner, talk to the neighbours, whatever it would take to get the horse surrendered. Diane headed out, yesterday evening, to get more pictures to send to us and hopefully find the owner.

The horse was getting water only because one of the neighbours had taken pity on him and had set up a water bucket for him. The neighbour was very helpful, but said she had no clue who the owner was, just that he comes out about once a week. The neighbour had called Animal Control multiple times, but nothing would be done. She was doing what she could by making sure he had water to drink. Diane also took a picture of the horses teethe and emailed them to Tawnee. Tawnee estimated him to be 7-8 years old. There is never an excuse to let your horse get into this condition, but it is especially evil since he is so young.

Early this morning Diane was out at the horses pen to give him some food and await the arrival of Animal Control. While Animal Control was there, Tawnee called Diane and was able to talk to the Animal Control officer. He explained to Tawnee that the horse was a very old horse, there was food for him on the property in the form of some green grass, and that he has been improving in weight and health, other than his hair seems to be falling out. He went on to say that he checks on the horse 2-3 times a day. Tawnee urged him to talk to the owner to see if the owner would be willing to surrender the horse directly to us. The officer told Tawnee that he was planning on putting up a notice that the owner should have a vet out within 48 hours. Tawnee knew from the pictures that 48 hours would probably be too late.

The owner of the horse was contacted by Animal Control. He didn’t speak any English, so the neighbour had to interpret the phone call. He stated that he would be willing to surrender the horse over to us. Immediately we went into action. The officer gave us the owner’s phone #. Thankfully we have a bilingual speaking volunteer, so arrangements were made for the owner to meet Diane at 5:00 to sign the horse over.

By late morning Tawnee was in contact with a local veterinarian office to get a vet out as soon as possible to evaluate the horse and determine what would be best. The vet office soon called back, they were really great and they offered to reduce the bill by 25% since it was a rescue situation, and they could have a vet out by 1:30. The horse wasn’t surrendered to us at this point, but the horse
had to get help right away, even if the owner changed his mind.
The vet arrived, and started her evaluation. She was horrified by what she found.

She stated it was the skinniest horse she had ever evaluated that was still alive.

There was just nothing left of him, no reason for him to still be alive.

She aged him at 7 years old, confirming Tawnee’s estimate based on a photograph. She also found a lip tattoo, meaning he is an off the track race horse. Just a few years ago he would have been living the life of a true athlete, now deserted and neglected, only hours or maybe a few days from death.

The vet also stated that the dry field he was in was full of fox tails and he had sores throughout his mouth. Every mouthful, of what he was hoping was nourishment, was just causing him more pain.

Diane had brought some oat hay out, so the vet offered it to him, which he gratefully ate and enjoyed.

After the evaluation was done he was turned loose. He wandered off as if there was nothing more people could do for him, sorrowfully hanging his head.

Tawnee was on the phone all day coordinating the rescue effort. Long distance rescue is not nearly as much fun for Tawnee as being hands on, but she did a great job of getting it all pulled together.
We have been in contact with a film production company that is making a documentary titled “Facing the Future of America’s Horses.” They were planning on visiting the rescue on Thursday and Friday to film part of the documentary, but they were only a little over 100 miles from the emaciated horse, so Tawnee called them to cover it. Like a flash they stopped filming where they were, jumped into their car and headed to the site.

At 5:00 the owner was there to meet Diane and surrender the horse. But he had changed his mind and showed up with 5 bales of hay and 2 sacks of grain. He told Diane that he had changed his mind and going to keep the horse. Diane, being translated by the neighbour, talked him out of it, reminded him that Animal Control was involved, told him there was a film crew that was going to be documenting it, etc. He decided to sign him over and head out as quick as he could. Shortly after the previous owner left, the vet arrived with the trailer to take him to the vet hospital.

There was a short wait for the film crew to arrive, but they were able to make the horse, by now named Pheonix, feel loved and cared for.

Poor Pheonix, he is just so skinny and in such terrible condition.

Soon the film crew arrived and began documenting the rescue.

They were saddened by the terrible condition that Phoenix was in, and they were brought to the reality of horse abuse by filming one of the worst cases we have ever seen of abuse by starvation.

Soon Phoenix was being led to the waiting trailer.

He was carefully loaded into the trailer. It’s always a huge worry with an emaciated horse that they will fall over and be unable to get up.

He had enough inner strength to make it the short ride to the vet, where he is resting comfortably now, and enjoying the luxuries of shavings once again. The film crew followed him to the vet office and documented him getting settled in. The vet also gave us a report and states that he was very happy to see some green grass when he got out of the trailer, and was more than delighted to see a fresh clean stall. His blood tests show that he is anemic, among other things, but he must know that life is looking up!

Diane is the true hero in this rescue. She didn’t have to stop her car and turn around. She could have kept on driving and Phoenix would die soon. She could have taken a couple pictures and not looked for help. Click here to visit her blog. 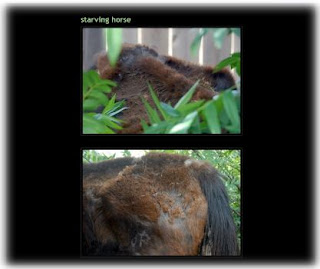 Please take a minute to stop over at Diane’s blog and thank her for saving this horses life. Yes it takes a rescue team, donations, a good vet, and a lot of people to save this horses life, but if it wasn’t for Diane, no one wo
uld know about this horses plight. Please click here to visit her blog and leave her a thank – you comment. 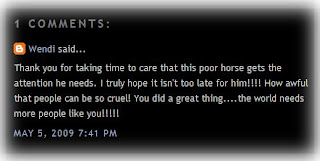 On a side note, the E-news did get sent out today despite everything else. If you didn’t receive it, click here to view it, after you have thanked Diane!