Notice:  The shelter will be closed Sunday the 20th.

Friday was a farrier day.  Aaron got to work as there were a lot of horses on the schedule. 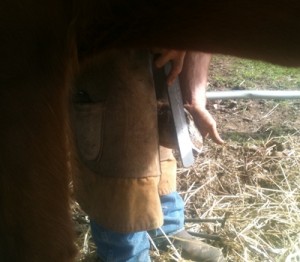 Phoenix is Aaron’s favorite horse to trim at the shelter.  He will just stand there perfectly for his entire trim without being held.  Phoenix really enjoys his trims. 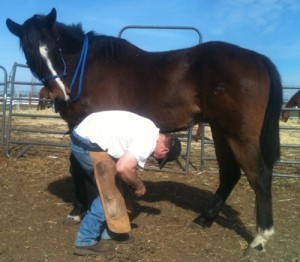 It’s hard to believe that not that long ago Phoenix looked like this, starving in a dry lot to the point where his body couldn’t even maintain his hair.  He was the most emaciated horse the multiple attending vets had ever seen still alive and walking. 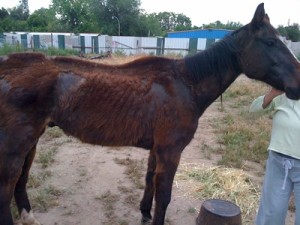 Those days are far behind for Phoenix now.  He has a lifetime sponsor and is enjoying his life. 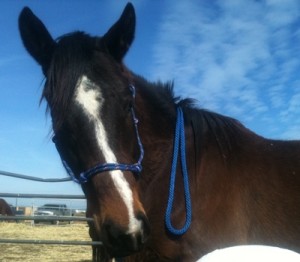 Phoenix’s buddy Napoleon also has a lifetime sponsor.  He doesn’t enjoy the trims as much as Phoenix, but was happy when it was all over so he could get back to his horsey life.  In all 19 horses were trimmed at the shelter.  Aaron charges $20 a horse for trimming, but gave an additional discount so the bill was $300.  Thank you Aaron. 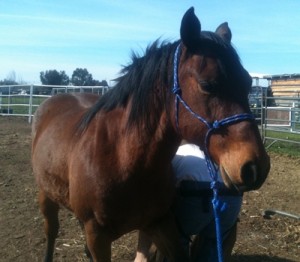 Dottie and Macho Man’s big secret was finally revealed when a trailer pulled into the shelter. 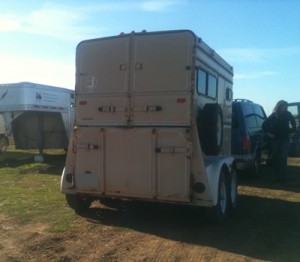 Meet Li’ll Shadow.  Shadow is a 30″ tall 15 year old mini gelding.  His owners wanted him to live out his life with Dottie and Macho Man, so they sponsored him to live at the shelter, making a little mini herd. 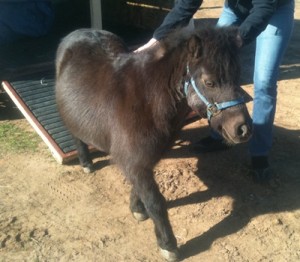 Shadow looked around wide eyed with excitement.  It’s been a little while since he has been with other horses, and how exciting it all was! 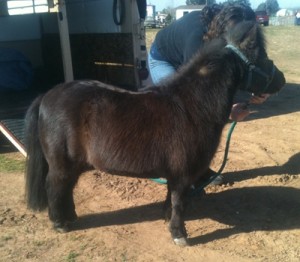 Shadow’s old mom led him over to where Dottie and Macho Man were contentedly eating hay. 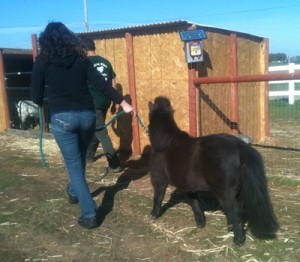 Their dull routine of munching hay was wildly interrupted with the new arrival.  Dottie was determined to make sure that Shadow knows she is the boss. 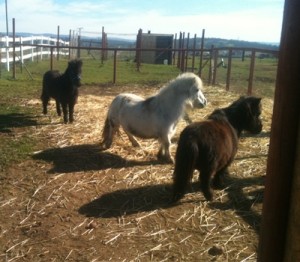 Macho Man was just happy that there was going to be another gelding to spend his days with and he won’t have to spend all his time with hormonal Dottie.  He can actually have some guy time now! 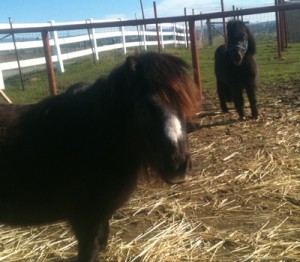 While Shadow was settling in we had some visitors come out who were looking to adopt.  They wanted to visit all the critters at the shelter. 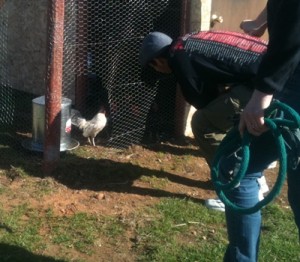 They were excited to meet one of the little roosters up for adoption, although they would not be able to adopt him.  They enjoyed petting him, and the remarks were made “How can we eat chicken now?  They’re so sweet!”  Tawnee said “That’s right, they are sweet affectionate little critters.” 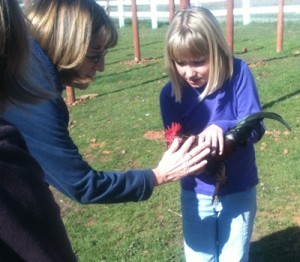 Shadow was settled in more by this time and enjoyed eating some treats from the visitors. 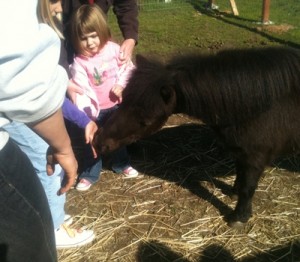 We are excited that Shadow has a calm, relaxed personality much like Macho Man.  He should be able to go out on many mini horse adventures with Macho Man.  Mr T had to come over and size him up to make sure he is still taller than the horses.  He believes he is, but he’s not quite certain. 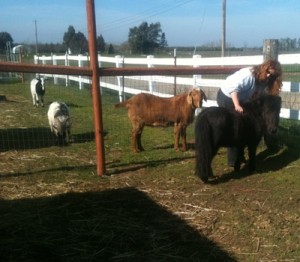 The folks who were visiting the critters wanted to adopt a goat.  Soon the goats were enjoying a picnic while the previously approved adopters were watching. 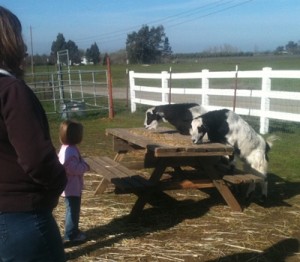 When the picnic was over, and Sir Peanut had established that he was still king of the picnic table, his adoption photo was being taken.  His new mom really fell in love with him and can’t wait to take him home and add him to her family who came from our shelter.  Pepper, now Obama the Llama, and the little jenny donkey she had adopted from us previously. 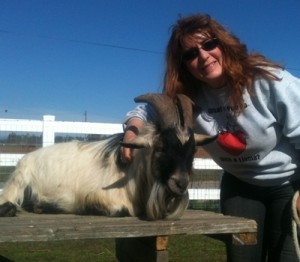 Sir Peanut was going to ride in the back of the SUV.  A nice blanket had been laid down, with some nice yummy food, and then Sir Peanut was ready to get in. 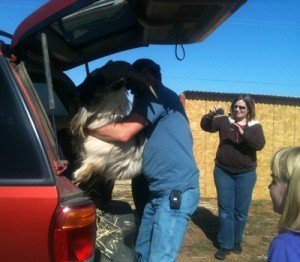 He was surprisingly very content in the back of the SUV and made himself right at home. 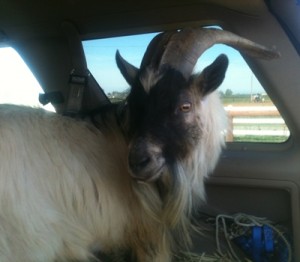 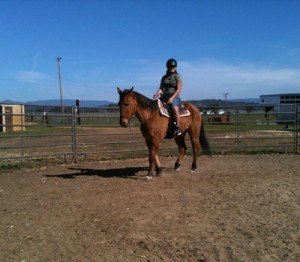 When Jason left the shelter he thought his horse encounters were going to be over for the day.   After a meeting, Jason was heading home about 1/2 hour after dark at the edge of a small town.  Rounding a corner, Jason was shocked to see 2 dark horses with riders wearing dark clothing in the middle of the road.  He slammed on the brakes, managing to avoid a catastrophe, and drove on a little ways.  He decided he should let the riders know it’s the law (and common sense) to have reflectors and lights on your horses if you are ‘brave’ enough (or …) to ride on a paved road at night. Fearing for the horses safety, Jason pulled a U-Turn and drove back to let them know.  One of the two riders, a middle aged white lady who was clearly under the influence of some kind of mind altering substance, immediately began screaming, cursing and yelling at Jason before he even had a chance to say anything.  She then charged the hood of the small car (Geo Metro) with her horse, almost making the horse rear up to avoid hitting the car.  Then she rode beside the car and kicked Jason through the open window, this whole time yelling profanities.  By this time traffic was starting to pile up on both directions of the road and the lady spun her horse and rode off into the dark.

Jason had never been assaulted by a lady before, much less a lady on a horseback who thought her horse was invincible.  We feel sorry for the poor horse who has to live with such a lady.

Just a FYI, if you do choose to ride your horse on a public road in California, there are some laws.  They are actually for your safety too.  Bisner and Chase attorneys have a great writeup on their website about horse laws on the road.  You can read it by clicking here. 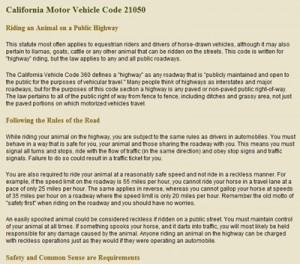 A dark horse with dark clothed rider is virtually impossible to see at night until you are right on them.  Reflectors and lights are an absolute must, but, better yet, ride during the day, and stay off the paved roads as much as possible.  There are people who hate people riding horses as much as they hate bicyclists, and will honk, throw things at you, etc just for being on the road.  Be safe. 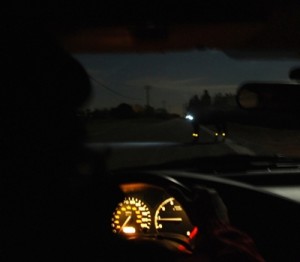 Due to the forecast, the shelter will be close this week and the next blog will be end of this week or early next week.  Have a great week and stay dry!  Keep checking our Facebook page for any and all updates! 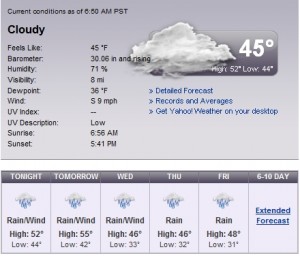 Don’t forget to vote for us every day! We are in 6th place in Ca thanks to your votes. Click here.

Many thanks to David P., Marsha H., and Catherine F. who all became monthly sponsors.  What a great way to help for only a few cents a day!  Click here to learn more.