Thanks to your extremely generous donations, the 20 Horse Rescue fund is now at $1,975, only $1,025 left to go!  Our staff and volunteers are heading out to rescue these horses and mules in a couple hours, but we wanted to give you an update first.  To help finish off the fundraising, click here. 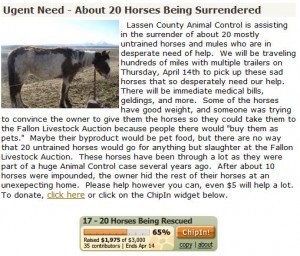 Tuesday evening Tawne was traveling along a stretch of rural highway and saw this poor little dog trying to eat some roadkill.  She had seen the dog several weeks ago along the same stretch of highway before, and had spent 30 minutes trying to catch it when it ran far into a field, where Tawnee was hoping it was running home.  Clearly not the case as it was still along the same stretch of road.  When she saw it this time her heart sunk.  This poor little dog had lost a tremendous amount of weight and had giant sores covering her body.  Tawnee stopped the truck and determined that she was going to catch the little dog, no matter how long it took or what she had to do.

The little dog was weak and wobbly.  Tawnee got in hot pursuit and started running after her, praying that she would be able to catch her.  She was finally able to loop around the dog and run it towards a fence.  The dog got to the fence and started barking and growling at Tawnee.  Tawnee had an extra shirt on, so she took it off thinking she could place it over the dog and catch her that way.  She did, and the poor dog yelped such an unearthly pitiful howl and started running off again.

Thankfully the little dog ran under the truck.  Tawnee knew there had to be some way she could get her out and catch her.  She got a lead rope out, looped it and managed to get it over the little dogs neck.  But, it was one of those old stiff lead ropes, and the loop wouldn’t go small enough to secure the dog’s emaciated neck.  She put her hand back inside the shirt, reached up, grabbed the lead rope under the dogs neck and pulled the poor dog out with a firm grasp.  The poor little dog was yelping, screaming and howling like the end of the world had come.  It was so sad, trying to help an animal but the animal is so in fear and pain that it doesn’t know it.

At her destination, Tawnee wasn’t sure if the dog was feral or had a traumatic experience with humans, so to ease the dogs mind that she didn’t have to touch her, Tawnee put the dog into a box so she could start helping it.  Tawnee chose the name “Little Waif” for the dog. 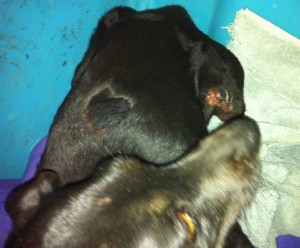 Waif is so incredibly skinny!  It is just heartbreaking. 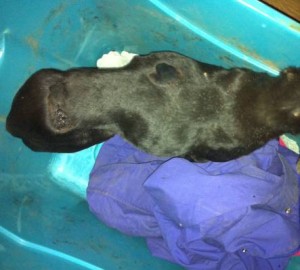 Soon Waif realized that Tawnee wasn’t going to hurt her and let Tawnee stroke her face.  There were so many ticks covering poor Little Waif’s body, everywhere you looked bulging ticks were hanging on, sucking her life out. 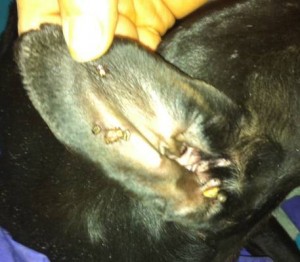 Some dog food was soaked in water and Waif was extremely grateful for the nourishment, and started realizing that people aren’t all bad and she was in good hands. 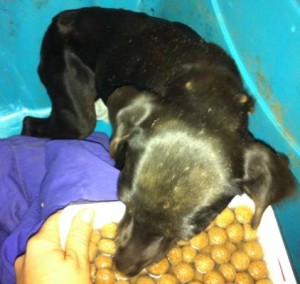 She really enjoyed that meal!  Who knows how long she has been trying to survive off of road kill and who knows what all. 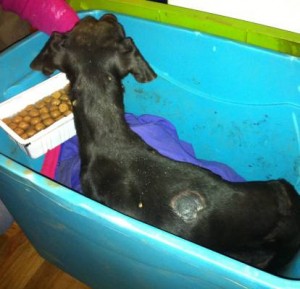 As soon as she was done with her snack, she couldn’t eat much her stomach is shrunken too small, it was time for her bath.  During the bath process, about 70 ticks where removed!  Poor little girl. 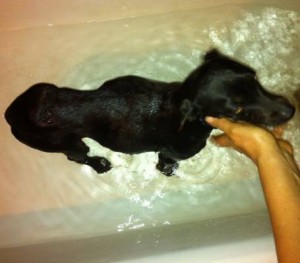 The sores covering her body were so painful looking.  They were mostly all on one side, making Tawnee think she may have been hit by a car.  She was wrapped up in a blanket and sent to bed for probably the best night she has had in who knows how long. 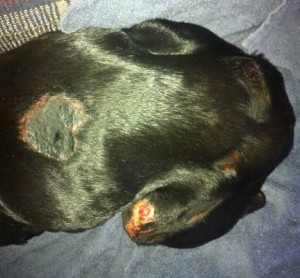 The next morning Waif had latched onto Tawnee and knew that she was there to help. 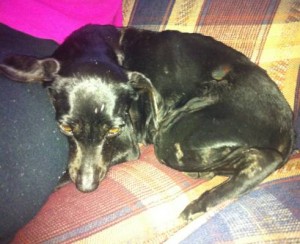 The vet was on the to-do list for that day.  Soon Waif was on her way.  She looked over at Tawnee driving with such the adoring eyes, almost as if she was trying to say “Thank you for everything!” 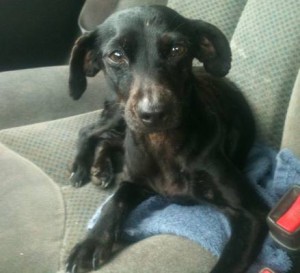 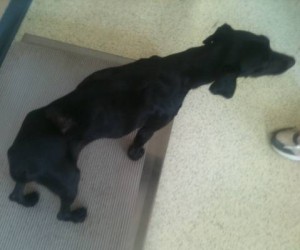 She was sedated as she became very nervous being around so many new people, sights and smells.  She needed to be examined, and no doubt her body was in pain too.  Soon she was prepared for X-Rays. 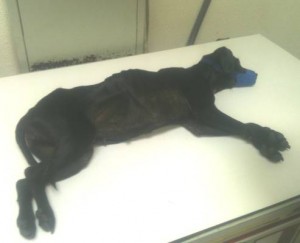 Dr Brown examined the x-rays closely, looking for fractures and broken bones.  There was a huge surprise instead… 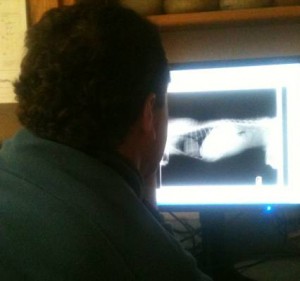 …and it’s not a good surprise.  Inside Little Waif’s body are shotgun pellets.  Those little bright dots should not be in the X-ray or in Little Waif’s body.  It is very likely that Little Waif got shot, but we are all hoping and Dr Brown says it is possible, that she has eaten an animal that was shot.  Time will tell.  There is also a possible fracture in her back as well. 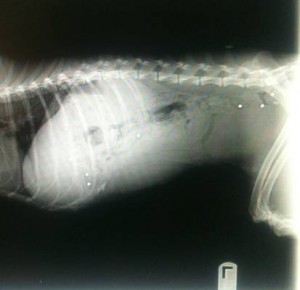 Dr Brown examined her and said that she should weigh at least 20 lbs.  She is barely over 50% of her body weight, she is so skinny! 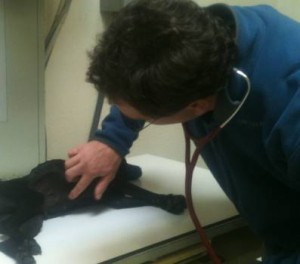 Her little ribcage protrudes so far you can easily count every rib, her hip bones are clearly visible, she is just so sad. 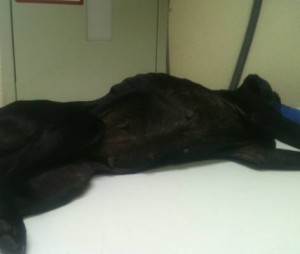 After the examination photographs were taken of all her injuries. 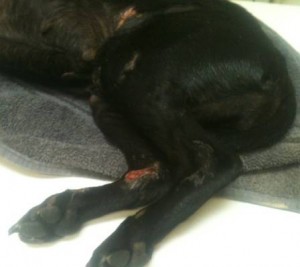 It was decided that Waif would spend some time at the vet to make sure she is on her path to recovery.  When Tawnee left she was sleepy, but was waking from her sedation. 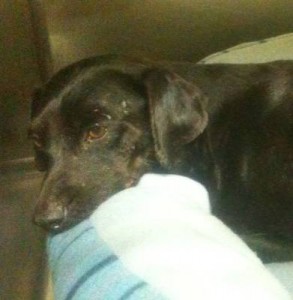 In the evening we got an update from the vet and Little Waif is doing very well.  She has gotten a really good appetite.  She should be able to recover and be a happy healthy dog once again.  To help with Waif’s vet bills, click here.

Please forward this on to your dog loving friends!  We mainly focus on horses and other farm animals, but every animal that comes our way we help how we can.