May is here and we finally believe that we are on a roll and all the technical problems are in the rear view mirror.  For this month, hopefully forever on, we have a full time person who will be fundraising and replying to phone messages.  If you get a call from Cathy, she is one of our staff now.  Tawnee is more than delighted that she won’t have to spend all day on the phone.  Let’s hope the fundraising can go good and she can go full time permanently.  For this month, she is going to be working hard to make that possible.

To bring you up to speed since the last normal blog.  We would like you to say “Hi” to Serenity Joy, named by our followers.  Serenity Joy was surrendered anonymously in our drop-pen.  We don’t have any information on her other than what we can observe from her.  She is a very sweet girl in her early 20’s. 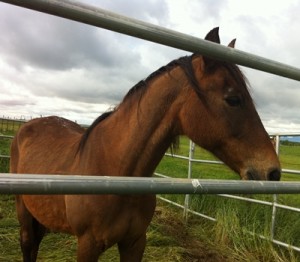 Benkey is back.  He was throwing goats into the air at his adopted home, and it was not a good match.  If he would have been a good boy he would have had a great home for many years.  He decided that goat tossing was more fun than behaving himself sadly.  They report that he didn’t have any problems other than goat tossing.  So, he is ready for another home without goats within reach.  No goats were seriously injured thankfully that we know of. 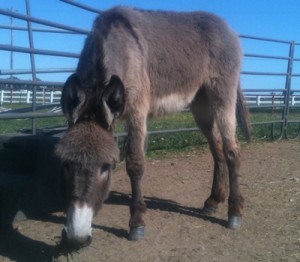 We would like you to meet Keys, he is an early 20’s Saddlebred gelding who’s owners moved away and he was abandoned.  The people that became responsible for him surrendered him so we can hopefully find him a new home. 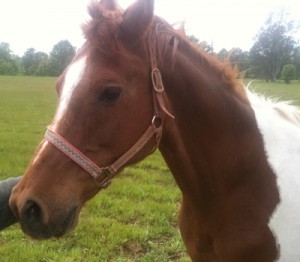 He is such a gorgeous boy, he is big, about 16 hands, and needs some groceries. 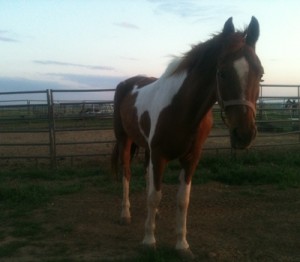 Meet Kubota, a gorgeous 6 year old BLM Mustang.  She is halter trained, and needs someone who can take her the rest of the way in her training.  She is drop dead gorgeous.  Her owner was no longer able to keep her. 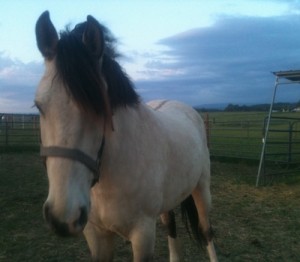 We got the sad news from the vet that Hope, the mule that came from the big rescue near Susanville, was incurable.  The growth coming out of her gums was more than a growth, it was a broken jaw that had bone chips and fractures, and it was not healing at all.  It was merely making huge growths inside of her mouth, and on the outside.  It was making it impossible for her to eat.  As it was untreatable, the condition would worsen making her life more and more miserable.  She was humanely euthanized to end her suffering.  Rest in peace sweet Hope! 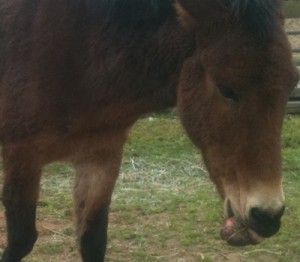 Aaron the farrier came out to get some hoof trimming done.  Shadow was a good boy for his trim and behaved himself like a gentleman.  One of the roosters was checking out what was happening. 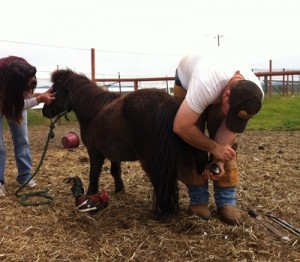 Wof was also a good boy and is excitedly waiting the day he can head home.  There is a rumor that on the 15th or so he will be going home. 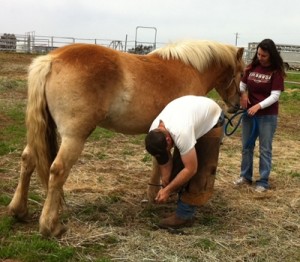 Grey tried to make the best pose he could while he feet were getting done.  He is such a handsome boy.  All in all 15 horses were trimmed up that day. 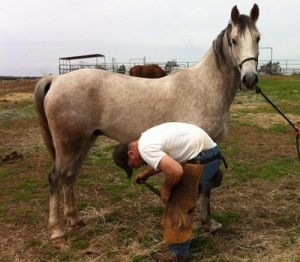 We had been worried about Gato for awhile now.  He was going to the vet to find out what was going on.  He had gained weight, but was not doing as well as he should. 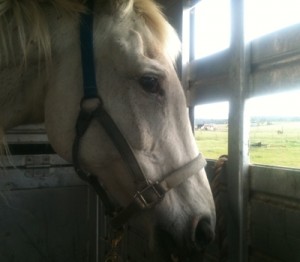 Dr Weaver examined him and told us that he most likely had internal cancer and that we had done what we could. 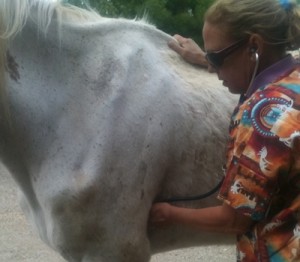 It was so sad, we had to say “Goodbye” to sweet Gato, but were comforted in knowing that during his time with us he was happy and enjoyed his companionship with the other horses.  You were a beautiful boy Gato and we will miss you. 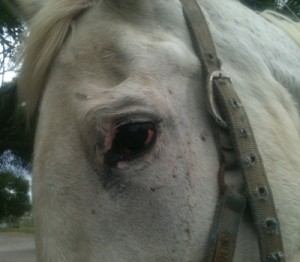 After the goodbyes were said, Banjo, the stallion from the Susanville rescue that was gelded, was ready to come back to the shelter. 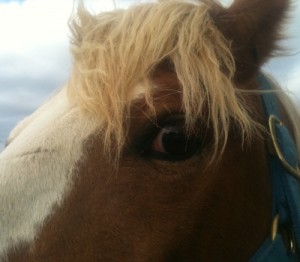 When Tawnee pulled back into the shelter the sun was setting which made very beautiful colors on the big rescue rig. 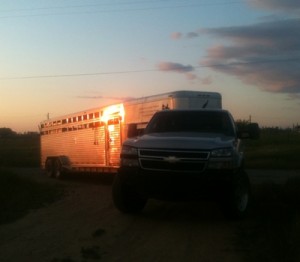 Sunday Macho Man was getting a bath.  There were big plans!  Macho Man has had a calm and lazy winter, but now with spring here it was time to get to work once again. 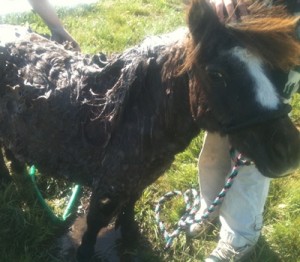 Accompanying Macho Man to a local horse festival, Shadow was going on his first booth outing.  It’s amazing that Shadow is 30 inches, which is tiny, but Macho Man is so much smaller! 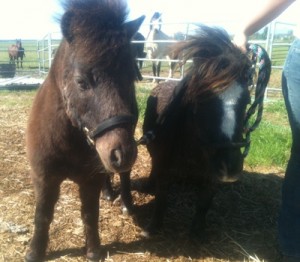 Soon everything was loaded up and they were off. 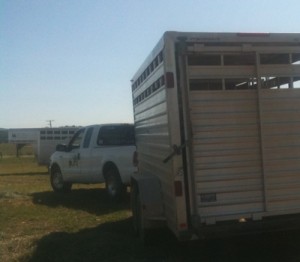 After a drive they arrived at the festival. 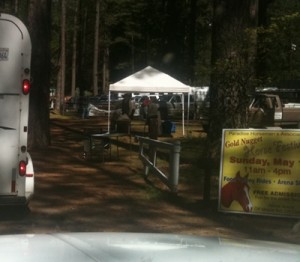 Soon the booth was set up with lots of goodies and information.  Macho Man buttons and bracelets for those that were interested in becoming a 2011 monthly sponsor. 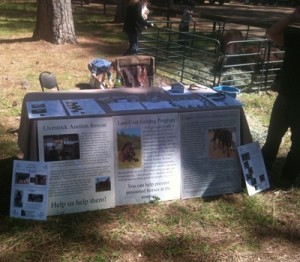 Shadow enjoyed his new adventure very much, but he put on quite the show when Macho Man went touring around the festival.  Shadow didn’t want to be by himself, so he started bucking and jumping around the pen.  A crowed quickly gathered around our booth to watch Shadow goof off with his horsey temper tantrum.  Soon he calmed down and enjoyed being petted. 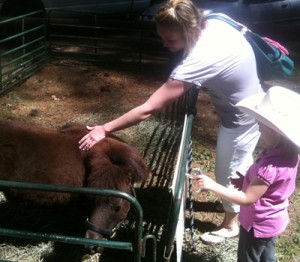 At the shelter on Sunday Serenity Joy was being looked at by some potential adopters.  She is such a good girl and is fit for a beginner rider. 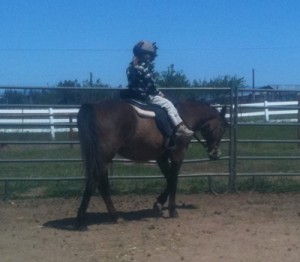 Contractor Ray meanwhile was busy working on the shelters that were damaged by the tornado and high winds.  They are looking so good!  We are planning on a work day to get them completed on the 15th, so if you are handy with a saw or a screwdriver, come to the shelter that day (unless it’s rainy or extremely windy.) 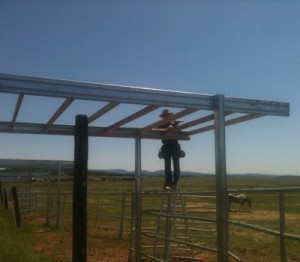 At the horse festival Shadow was really enjoying the whole booth experience.  He was amazed on how many pretty horse girls came over to visit him.  He really liked this one that had a flower tucked behind her ear. 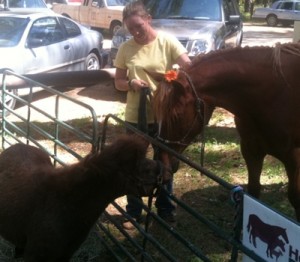 And of course there were lots of little people that wanted to give him yummy things to eat. 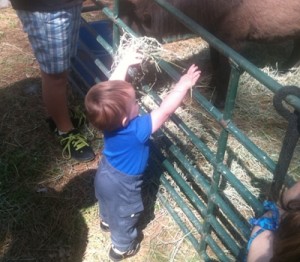 At the end of the day the donation can had over $50.  No new monthly sponsors, but the expenses were covered. 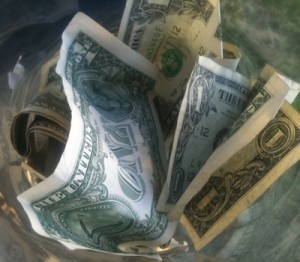 You will be sick when you watch this news clip.  News 10 did a story about a field full of horses who’s owner stated they are going to slaughter because it is not illegal to ship horses out of California to neighboring states where they are then going to be shipped on to slaughter.  Why there are no California law enforcement agencies interested in prosecuting people who are committing 40 felonies with every trailer load we have no idea.  The law is plain “…if they should have known that the horses were going for slaughter…”  The KB’s know the horses are going for slaughter, they just thumb their nose at the law.  As you remember, last summer we got a lot of horses out of a staging area somewhere near Turlock, where horses were amassed before being forced into overcrowded trailers for the grim ride to Mexico.  Some people said we were lying because the horses didn’t have green slaughter tags.  Neither do the ones in this news clip.  You don’t need a green tag on your horse to go to Nevada.  Or Texas.  Plus it’s hard to get those green tags when it is a felony for a horse to be shipped to slaughter out of California. But, it happens every day without the tags.  We know that we are a strong horse community with all of our followers and over 10,000 fans on Facebook.  It is time to rally and let California know we want a stop to this.  We will not stop until KB’s are behind bars.  We have the power to keep California horses safe, let’s do it!  If you have any ideas on how to stop this, please contact us.  We need to formulate a plan, get on the same page and get it happening. 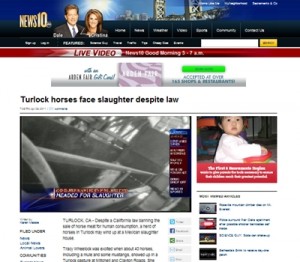 An update on the horse abuse going on in Loomis.  We are still gathering information. Animal Control has gone out, and the horses have been seen by a vet.  They are going out in June to have another welfare check done.  Some of the horses we are finding out are leased by Lightningwind Arabians.  Hopefully the owners of the horses will break the lease and take their horses to safety before they are starved to death.  There is an Arabian Forum where folks are talking about this situation.  To read up on it, click here. 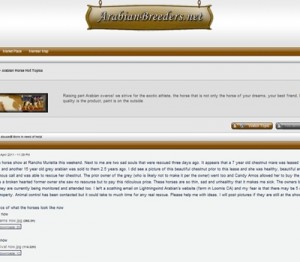