There are some creatures in this world that just make us smile, and the donkey is one of them.  The big ears, the lovable personality and the hilarious bray.   There is nothing cuter than an adorable little baby donkey.  Such a precious little life. 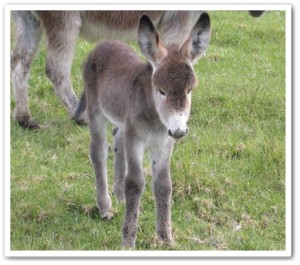 Sadly, in Texas, they have decided that baby (and adult) donkeys are an unwanted destructive alien pest that is to be shot on sight in Big Bend Ranch State Park.  They have done nothing wrong, and have been roaming Texas for over 500 years.  Now, park rangers are ordered to shoot donkeys on sight.  We believe this is an effort to increase big horned sheep population so hunting licenses can be sold, often fetching up to $152,000 each that benefits Texas. 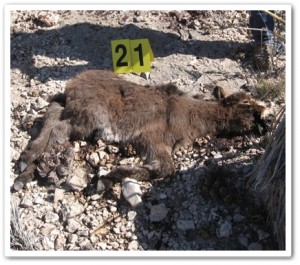 Anyone associated with making money off of Big Bend Ranch State Park seems to be supporting this.  We looked at “Visit Big Bend” Facebook page and saw that they support the killing by telling concerned people “Burros are an introduced, invasive species.  They inevitable affect the ecosystem of Big Bend, like any large grazing animal does.  The killing of the burros in the state park is part of a population control program.”  We asked people to declare their disgust at shooting innocent donkeys on Visit Big Bend’s Facebook page, which people did.  Their comments promptly got deleted.

Big Bend Ranch State Park has been shooting donkeys for a number of years, but now they have started up again.  Back in 2007 this detailed report was released detailing the operation.  It described how they shoot them in the belly and let them wander off and die, how some park employees shoot them from helicopters, it is quite disgusting.  They purchased portable catch pens but never attempted to use them.  As stated in the report, “The donkeys were shot from the road as they won’t run from cars.”  If you want to read the report of what is going on in Big Bend Ranch State Park, click here. 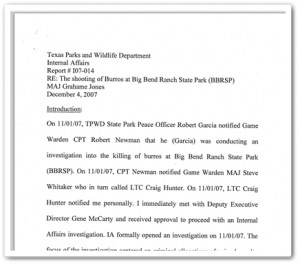 The Wild Burro Protection League has a petition to stop the killing of donkeys in Big Bend State Park.  To sign the petition, click here. 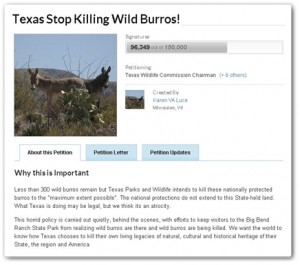 We have started a Boycott Big Bend State Park page where the latest information on this atrocity will be posted.  We are working on possible solutions and would like your feedback, especially if you are from Texas or have experience rounding up wild donkeys.  The brutal senseless killing has got to stop.  Until then, we can certainly spread the word and boycott Big Bend Ranch State Park.  If tourist dollars don’t come in, the park will take notice. 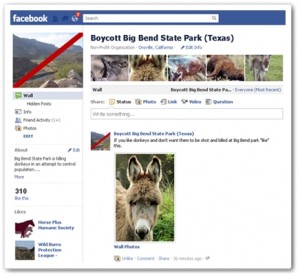