We have the year end stats for you!  We rescued and sheltered 546 animals in 2012, which is the most animals we have ever rescued in a year.  353 of those were equines, 106 fowl, 54 goats/sheep, and others.   Our euthanasia rate dropped to 27% in 2012, this includes animals that were owner surrendered for euthanasia and animals that were rescued specifically to be given the Last Act of Kindness so they did not have to endure the trip to slaughter.

Our financial estimates are in for 2012 as well.  We received about $210,000 in donations.  To see how the money was spent, click the graph. 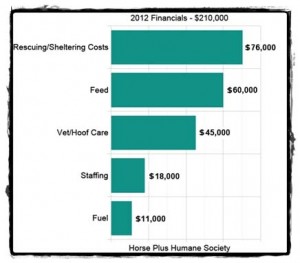 With a break in the rain storms our trainer Steve has been able to evaluate more horses.  This is Goliath from the last auction rescue, he is a very nice boy.

We would like you to meet Bayo, her owner committed suicide and abandoned her at a boarding stable.  She is a 12 year old Thoroughbred / Hanoverian mix.  She is very well trained in dressage.  She is registered with the Sport Horse association.  She had an injury to her stifle which she received a surgery for, and she should be as good as new now.  We will be evaluating her, but she seems very nice.

Thursday a big trip was planned with over 500 miles.

Many of you remember Senorita, the poor skinny 28 year old mare who was pregnant that we rescued at the last auction rescue.

As you can see she is doing much better, gaining weight, and was getting ready to get into the trailer to go to her new home.

Before loading up she got a blanket put on to keep her warm during the long trip.

Clover and Nina were also loaded up in the trailer to head out.  They are in the Extreme Rescue Makeover and were matched up with a trainer.

They looked out of the trailer wide eyed with excitement.

Last but not least Hugh was loading up too.

He was such a good boy and hopped into the trailer.

Before long he was looking out at his new home.

He is also in the Extreme Rescue Makeover challenge and is very excited to be matched up with a great trainer.  When he got into his pen he calmly walked around checking it all out.  He is such a pretty boy.

Good luck Hugh, we look forward to getting updates and seeing you at the grand finale!

Hugh’s trainer took a peek in the trailer to take another look at some of her competition. Nina and Clover peered back at her.

After some more driving Clover and Nina unloaded into the waiting pen at their new home.

Then Nina rolled.  It was nice seeing them so comfortable in their new surroundings.

They are two beautiful girls and we can’t wait to see updates on them as well.

By this time Senorita was wondering when she was going to be at her new home.

On and on the rescue rig rolled, soon it was dark.

Finally Senorita arrived at her new home.  She was anxious to get out of the trailer.

She was very happy to find herself in a nice clean stall with nice yummy food.  Her adopters are so excited and are going to give her the best of care as she continues her pregnancy.

Her adopters are previous adopters and previously adopted Powder.

For those of you that don’t remember Powder, he was a poor little albino orphan foal.  He had hearing and sight issues.  You can see his blog by clicking here.

Finally everyone was in their homes and it was time to head back to the shelter.

There was a commotion up ahead on the freeway, it was hard to see what it was at first, but then it became very clear: a horse trailer was involved in an accident.

There was a frightened horse inside the trailer and the trailer was tipped up on one side about 3′ off the ground.

Tawnee was asked by the Highway Patrol to go into the trailer and calm down the frightened horse and unload it from the trailer and load it into our trailer to be taken to safety.  To watch the video, click here.

The next morning, Friday, the truck and a different trailer were on the road once again.

First on the agenda was to pick up Dusty, a very cute BLM donkey.  He lived in a small shed with his homeless owner.  His owner was evicted and left Dusty behind in the shed.  One of our long time supporters rescued him, got him healthy, and surrendered him to us so we could find him a new home.

He loaded up so well, he is such a good boy.  You never know when you’re loading a donkey if they are going to decide to get in or not.

He looked a little worried when Tawnee told him “Don’t worry, we’ll get you gelded and in your new home in no time.”  He probably liked the idea of a new home, but that gelding part is always so worrisome…

From there the rescue rig headed to Animal Control to pick up a horse they wanted to surrender.  He has some lameness issues we will be checking out, hopefully he will be OK.

Animal Control also donated an entire truck load of feed.  Thank you so much, we can always use feed!

They also asked us to take two guinea pigs.  They are the first guinea pigs we have ever had and they are quite adorable.  They are named Snowflake and Geronimo.

By the end of the day they were in a foster home and getting lots of love and attention.  As you can see in the photo their toenails are quite long and needed tending too.

We will be posting old rescue stories for most of January so keep an eye out for interesting stories.  We will be open for our regular business hours unless it’s raining.

Thank you all so much for your support in 2012!  Every dollar donated went to rescuing, sheltering and adopting so many wonderful animals.  We couldn’t have done it without you!  Please partner with us in 2013 by making a financial donation to help animals in need.  Click here.