On July 28th we attended an auction in TN and we rescued 11 horses.  We were only able to introduce you to 10 of the horses at that time, but there was 1 more.  He was a sored, registered Tennessee Walking horse named Gen’s Ice Glimmer (Glimmer.)  This is his story.

Tawnee first saw him in the parking lot as he was being ridden around in his 5″ stack shoes with chains around his pasterns.  He was definitely very familiar with doing the Big Lick and was decked out in show gear.  Tawnee knew that this horse had to be known out there, and wanted to keep him from being bought by someone in the Big Lick industry OR from being sold for slaughter. 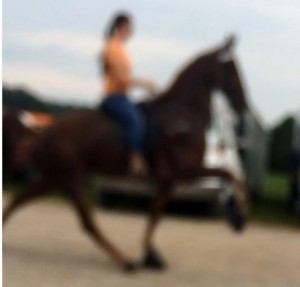 Tawnee talked to the people selling him and when she asked if he was registered, they pulled out his papers.  Tawnee called a person leading a Citizens Campaign against Big Lick Tennessee Walking Horse Animal Cruelty and he offered to help pay for part of his rescue costs. 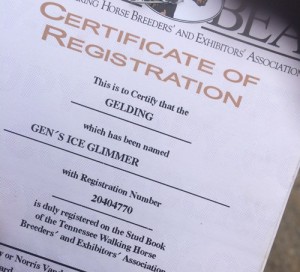 After purchasing him, Tawnee asked when he was last shown, and he had been shown a few days prior to the sale.  Not knowing that Tawnee founded one of the biggest Horse Welfare groups in the world, they were nice enough to text her pictures of Glimmer at shows. 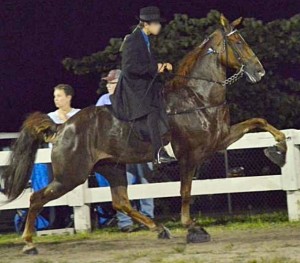 As soon as Glimmer was purchased, Tawnee started documenting his sored legs and his scars. 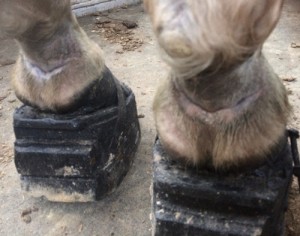 You could easily see where Glimmer has suffered so much at the hands of such cruel people.  You can see the scar tissue built up in this photo from the noxious chemicals forced into his skin. 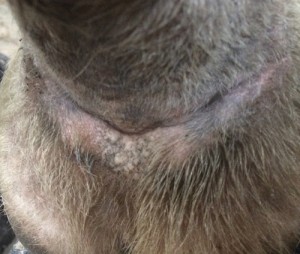 There were also scars on the front of his legs from the horrible chemicals they use to burn into their flesh, causing such pain they flinch, all for the desired “big lick.” 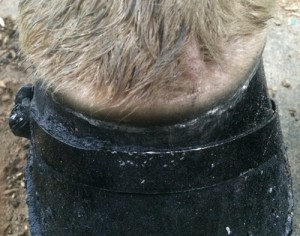 After researching on the internet, Tawnee found where Glimmer had been advertised on Craigslist for $757.   He didn’t sell on Craigslist so they took him to the auction. 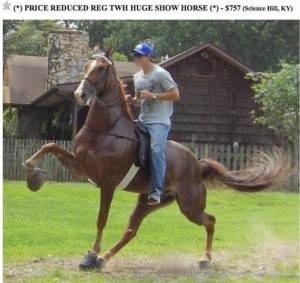 We felt really sorry for Glimmer, the huge stacked up front shoes made it difficult for him to even get out of the trailer.  His previous owner said he had been wearing them pretty much all his life. 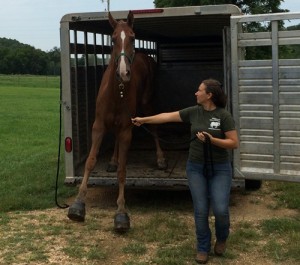 We took picture of Glimmer next to the stacked shoes that came off of Venus.  She was another TN Walking Horse we rescued at auction.  Thankfully Venus had recently been put in the stacks, so she was able to be removed immediately with no ill effects.  To see her rescue story, click here.  Glimmers shoes make Venus’ look tiny in comparison and are 5 inches tall.  Can you imagine wearing 5″ high heels every day for your entire life? 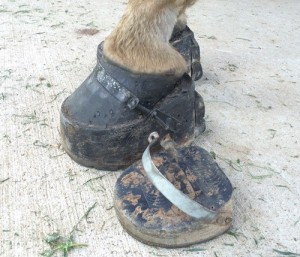 We took Glimmer to the vet upon arrival at the shelter and he examined him for signs of soring.  He stated there was absolutely no doubt that Glimmer had scars from soring. 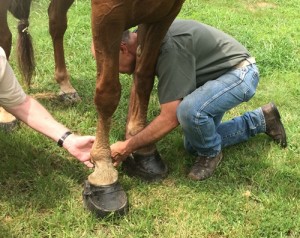 To see a video of the vet examining Glimmer’s hooves, click here. 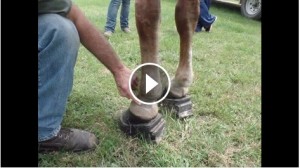 Glimmer was definitely enjoying all the attention that our volunteers were giving him.  Lydi and Kirstein enjoyed rubbing his head and telling him that all his troubles and pain he has endured is over. 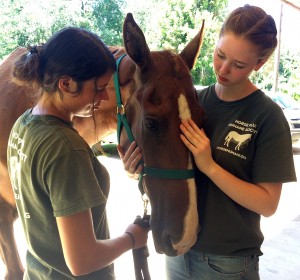 Glimmer also had a terrible fungal infection in his ears.  It caused his ears to be extremely painful to the touch. 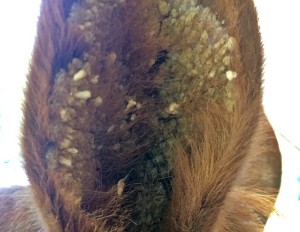 The vet gave Glimmer treatment to give him some relief from the pain and to treat the underlying problem.  We have been told by people that are extremely involved in exposing the Big Lick that the likey reason he had the fungal infection is they use the same clippers for his ears that they use on his legs, and the nasty chemicals they put on his legs infected his ears. 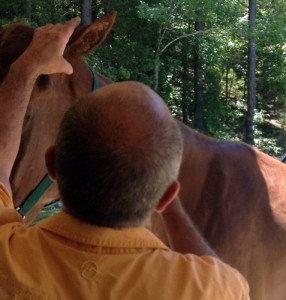 We knew we wanted to get Glimmer into an enviroment where he would be feeling like he’s home.  He has never lived out of doors, in the open air, or in a pasture, and wearing the 5″ stacks, it was dangerous for him to be out of a stall.  A leader in the fight against Big Lick Animal Cruelty who helped rescue Glimmer decided to adopt him, so Tawnee delivered him. 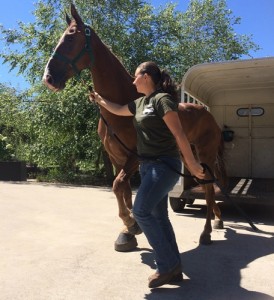 Once he got into the stall, he absolutely relaxed and collapsed down, getting some relief from his sore feet.  Poor guy, he has no idea what it means to be a horse.  All he has known is a life full of pain and suffering, constant agony, just so he can give an impressive performance for judges that have a very twisted view of a beautiful gait. 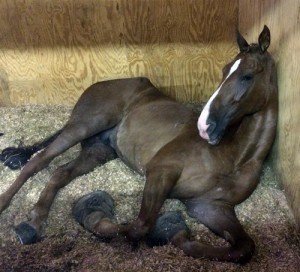 A USDA vet came out to investigate and examine Glimmer’s soring.  He began the investigation and was extremely thorough, checking Glimmer’s hooves and legs.  He didn’t want to miss a thing. 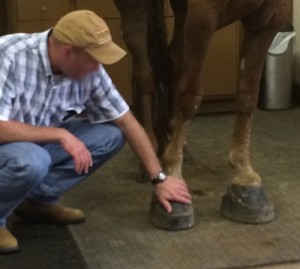 Then they did other tests and watched him move.  They photographed and documented everything.  You could see Glimmer trying to put on a brave face while they did all this.  The vet said that Glimmer had definitely been sored from chemicals and was still sore from the effects of his last soring. 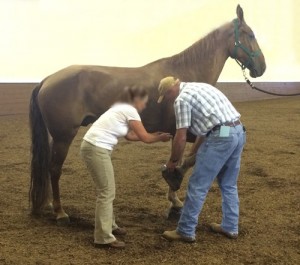 Glimmer is no stranger to USDA vet inspectors.  In 2013 his trainer (a 2012 Celebration Judge at the top Big Lick show) was fined and Glimmer was removed from a show at MTSU (Middle Tennessee State University) due to soring.  To see the report, click here. 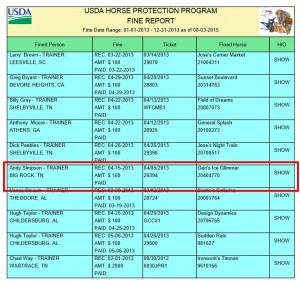 Hair samples were taken to be tested for chemicals. 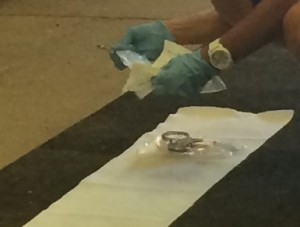 The USDA has opened an investigation because of Glimmer and we are so happy we were able to rescue this precious boy and take him to safety.  Hundreds of horses out there are going through the same living horror that Glimmer went through for so many years.  Hopefully with Glimmer’s story, more people will become educated, people will go to jail, and the soring will stop! 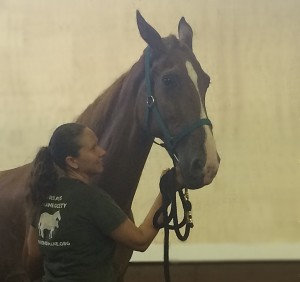 If you have never heard of soring, or are unsure exactly what is happen, please watch this very educational and well done ABC Nightline story.  You won’t believe it!  Click here. 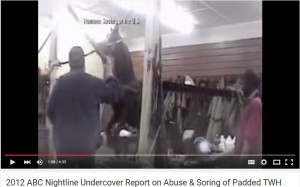 A reporter with www.billygoboy.com wrote an in-depth story about Glimmer.  You can read it by clicking here. 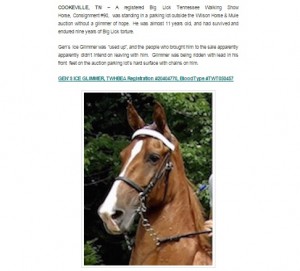 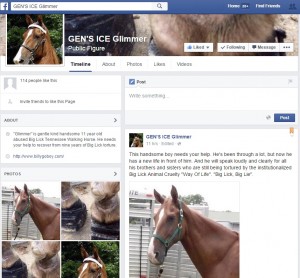 Most important of all, there is a very important Change.Org petition asking MTSU (Middle Tennessee State University, where Glimmer was caught being sored by the USDA) to help stop public support for the Celebration events with Big Lick horses.  This petition needs your support!  Online petitions, when specific and focused, can do a lot of good, and we believe this petition is worthy of your few minutes to sign it.  Click here. 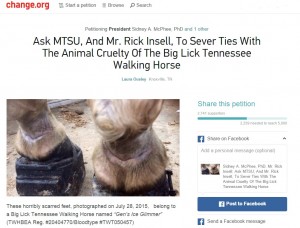