We need your help to rescue horses at slaughter auctions in Oklahoma this month.  Our Oklahoma rescue team is ready to save lives, but we need your help to do it.  We are planning on attending multiple auctions to save as many as we can.  For more information and to donate, click here. 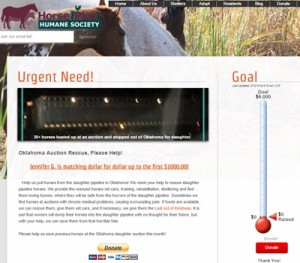 A fan, Mindy, said she nominated our organization to Mike Rowe’s show, Somebody’s Gotta Do it.  She says “It would be great publicity and would help the plight of slaughter bound horses reach a wider audience. If more people can nominate Tawnee and Horse Plus  it would probably help. I’d love to see you guys on the show.”  We agree with her and maybe you will too.  To Nominate Tawnee Preisner of Horse Plus Humane Society, click here. 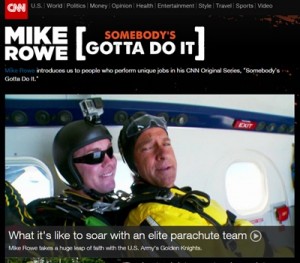 Tuesday evening on the way to the Animal Welfare Meet and Greet we spotted a poor little dog on the side of the road.  We were hoping it belonged to house close by.  After the meeting some volunteers went to look for her and she wasn’t anywhere around.  Wednesday morning on the way to meet up with Tawnee, one of the volunteers with her son Joe saw the little dog again, obviously she had been dumped alongside the road. 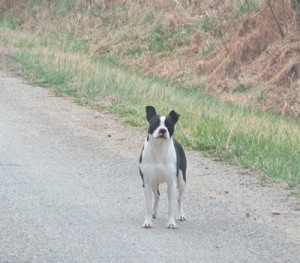 The dog didn’t want to have anything to do with them and was very scared.  Joe tried coaxing her but she was very reluctant. 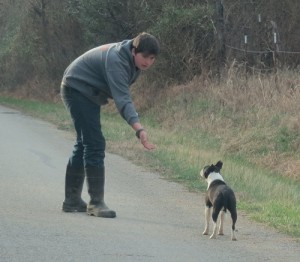 It took a very long time to gain this little dog’s confidence.  She wanted to be close to humans but was scared to be touched. 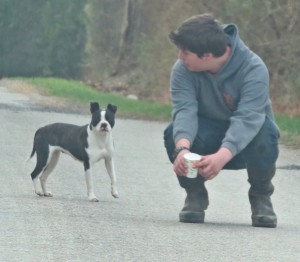 Over 30 minutes of coaxing and waiting finally led to the little dog letting Joe touch here.  She still didn’t want to be picked up, but she was willing to accept a rub. 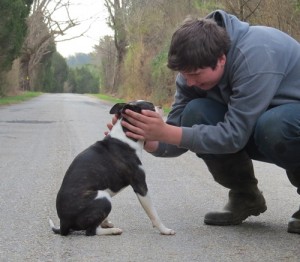 They then decided that maybe if they got into the car she would maybe jump into the car with them.  She jumped in briefly but then jumped out and didn’t want to get back in. 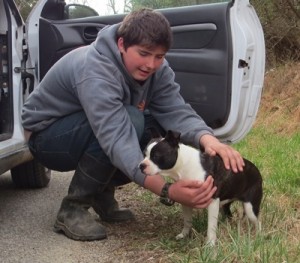 Finally Joe won the little dog’s trust enough that she let him pick her up.  We are very thankful that she did not get hit on the road overnight or shot as many stray dogs are in rural TN.  There are no animal shelters in the area.  It is really horrible and the animals suffer. 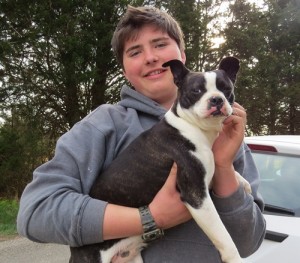 Joe’s mom met up with Tawnee and they hit the road.  The little dog was going to spend the day with Joe. 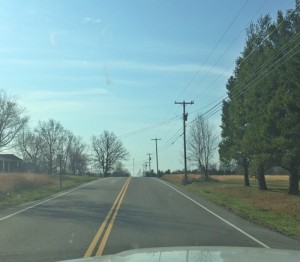 They were going to an Amish auction.  One of the Amish family’s are moving and all their stuff was being sold, including some of their horses.  By the time Tawnee and the volunteer arrived a lot of people were already there. 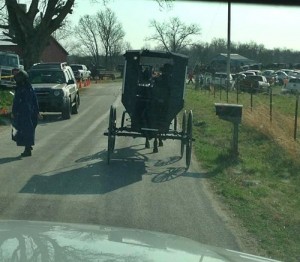 One of the horses being auctioned off was a 4 year old Standardbred buggy horse. 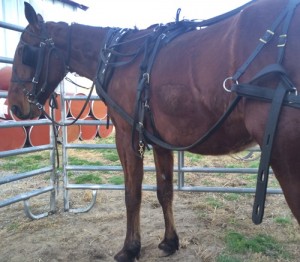 He is such a sweet, beautiful boy and was so gentle.  Most of the Amish horses we come in contact with are completely comfortable with humans and show no signs of aggressive training or handling.  Just like in every culture, most people take good care of their animals, but sadly there are some who do not. 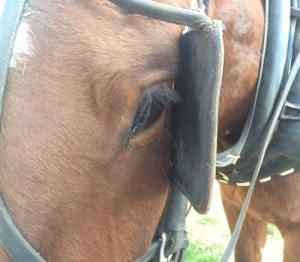 The other horse being auctioned off was a 10 month old Percheron colt.  He was such a sweet guy!  This is probably the first time Tawnee has been seen in a skirt in the blog, but when you’re in Amish country, there’s no reason to needlessly offend their sense of modesty and decorum. 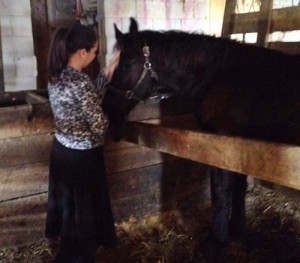 Another item being auctioned off was 17 very heavy duty 6′ high panels.  We really could use these at our TN shelter!  Tawnee was hoping that they would sell cheap. 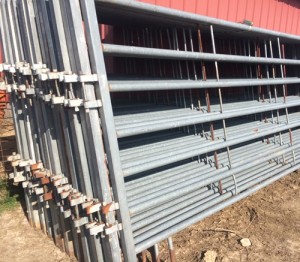 There were also some nice feeders that would help keep the grain off the ground.  Would they auction off cheap enough? 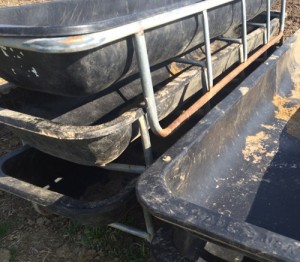 A strange pile of metal bars was sitting on the ground.  Were they big bed frames or what were they? 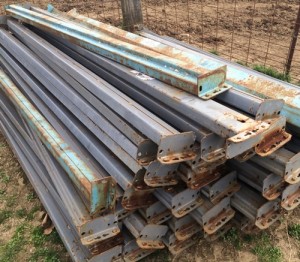 After looking around their farm it became quite apparent: they were using the industrial rails for fencing.  Looks nice and is extremely strong and safe.  Tawnee decided that we definitely needed those rails if they were cheap enough. 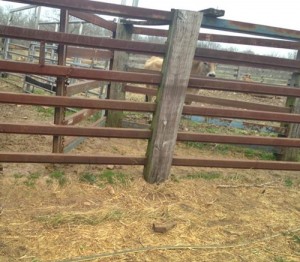 It was such a beautiful day and so picturesque.  All the Amish had parked their buggies and tied their horses a ways off.  Most auction parking lots are full of trucks and trailers, but this one was full of horses and buggies. 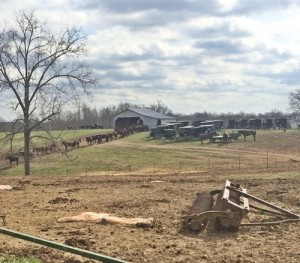 Finally the auction got underway.  After auctioning off lots of little farm equipment items they got to the horses.  Tawnee was ready to bid!  The price went down low, to $300, then started going up.  And up.  And up.  It hit $1,000.  Then $1,500.  Then $2,000.  The horse was finally sold for nearly $2,500!  Definitely not going to slaughter, and was far higher than most auctions.  If this horse was at a typical horse auction it would have sold for about $400 and shipped to slaughter.  The young colt was auctioned off and brought almost $2,000.  He was safe from slaughter too!  There are kill buyers who go to these Amish auctions hoping to pick up horses cheap. 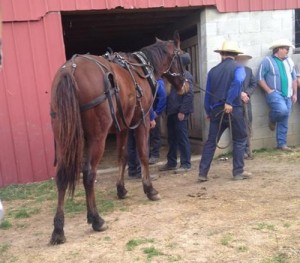 Next some hay was being auctioned.  It went for $7 a bale for 2 twine square bales.  Auctions are funny, you can buy the same hay for $3-$4 a bale on Craigslist locally.  The panels sold for $140 each and we just don’t have the budget for that. 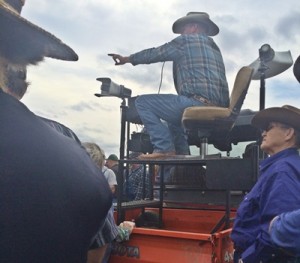 After the auction Tawnee had won the bid on the strange metal rails, the feeders and a whole lot of rubber mats to help with mud control.  Tawnee was very thankful that our farrier Moses, an old order Mennonite, was at the auction.  He started helping load the rails into Tawnee’s truck. 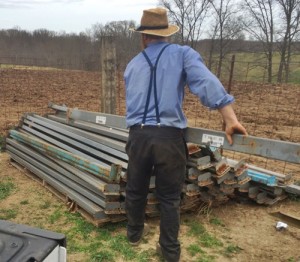 Finally the truck was full and the load was strapped down.  Moses put some stuff on top that he purchased and Tawnee had to call some local volunteers to come move the rest of the stuff she bought.  They will be storing it at their place until arrangements can be made. 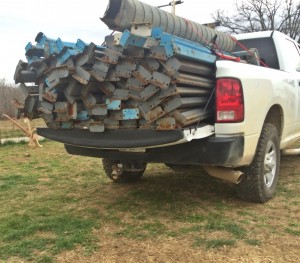 It was interesting leaving the auction and seeing the Amish wagons loaded down with their new treasures. 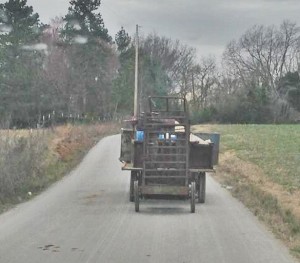 On the way back from the auction Tawnee stopped in to check in on the horses she did a welfare check on the day before.   If you missed that blog, click here.  Tawnee was excited to see that they had taken her advice and had given them free feed grass hay.  It looked like good quality barn stored hay, and they had a pile of hay near the pen under a tarp.  The Palomino had eaten its full and was standing sleepily with a full belly.  The other horse in the barn is going to be out soon, he doesn’t get along well with the other horses so they are going to fence him a pen. 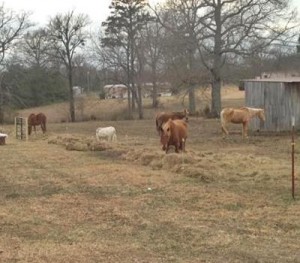 At the end of the day Tawnee checked in on the little dog now named Daisy.  She is doing quite well and will be staying with Joe for the time being.  She is definitely getting comfortable being around people again. 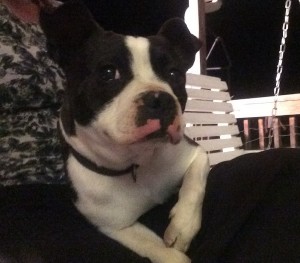 Thank you everyone who gave us your feedback about the blog style.  We appreciate your feedback and will do our best to keep you informed.  We are working on trying to get our CA and OK teams blog savvy.  Jason and Tawnee have been writing these blogs for almost 10 years now and we know many of you have enjoyed reading them and following our day to day work.

Thank you all for your support!  Please remember our Auction Rescue Fund as we are planning on saving lives at Oklahoma Slaughter Auctions soon – Click here.