Shari, our Oklahoma Shelter Manager, attended an auction Saturday night but the prices were all far above slaughter price, so she was unable to rescue any horses at that auction.  She plans on attending more during this week.

Tawnee was at an auction in Tennessee where horses were selling in the slaughter price range.  She purchased an in-tact jack donkey for $20.  Two Standardbred horses were brought into the auction ring wearing their harnesses.  They were brought to the auction by the Amish as they no longer needed them.  Tawnee won the bid on both of them, keeping them from the kill buyer. 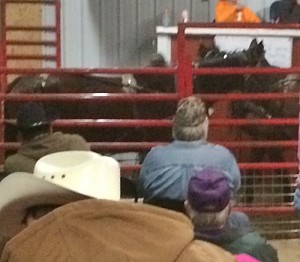 After the sale, Tawnee and Kimberly went back to see the horses and donkey they had rescued.  The Standardbreds looked a little tired.  They are used to going to sleep when the sun goes down. 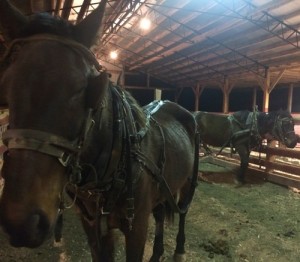 The little donkey turned out to be unhandled and was quite shy of people. 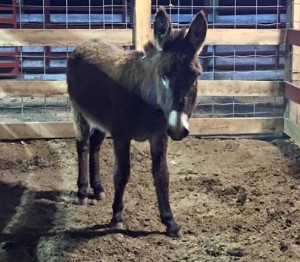 Each of the Standardbreds had to be unharnessed.  One of them wasn’t too keen on having the harness taken off, but with a little gentling coaxing she was fine. 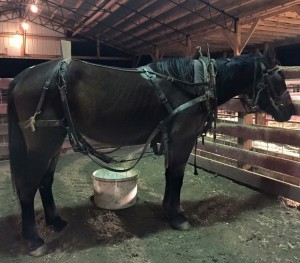 She has such a pretty face and a gentle eye. 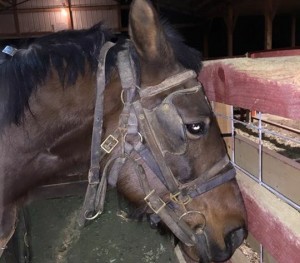 The other Standardbred is blind in one eye.  We have been needing some harnesses as we have been getting numerous horses that are trained for harness work, and now we can evaluate them better with these harnesses that were sold with the horses. 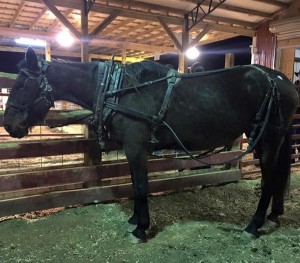 There was a mare standing across the alley all tacked up.  She had been ridden through the auction and sold to another person.  It turned out that the person was a horse trader.  He asked us if we would be willing to purchase her as he decided not to try and resell her.  The kill buyer offered him $400, but he said he would sell her to us for $380 just so she wouldn’t get slaughtered.  We agreed! 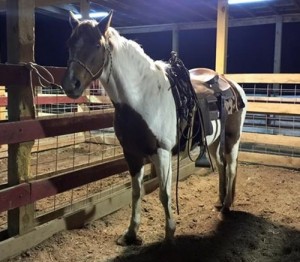 We believe that the horse trader may have decided he didn’t want to resell her because she has a skin tag on her nose from an old injury. 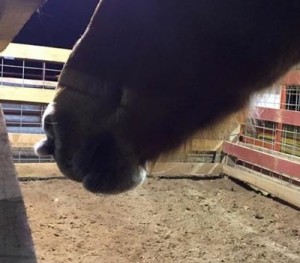 The slaughter truck and trailer pulled up.  He already had other horses in his trailer when he pulled in.  We were so glad that this mare wasn’t going to be loading up on his trailer. 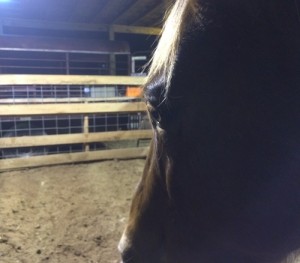 The kill buyer purchased two wild mules that we were not set up to handle.  We can’t wait to get our shelter built and functioning, ready to handle wild horses and mules.  We are currently using a foster home as our temporary Tennessee shelter and it has limited housing for wild horses. 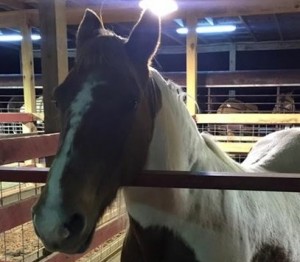 The donkey (in another pen) and the horses got settled in for the night.  Arrangements were made to pick them up later. 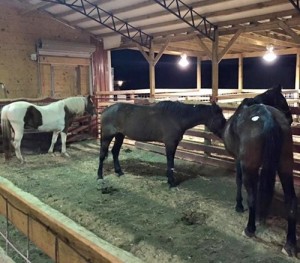 Tawnee headed down to the auction to bring the rescued critters back to the shelter. 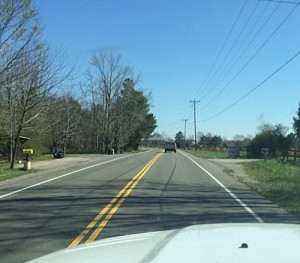 The two Standards led well together.  They have worked as a team for many years. 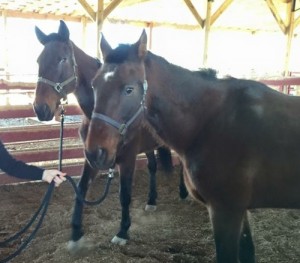 One of the auction workers said he didn’t know if they would get in a trailer because the last time they got in a trailer they were probably yearlings as they have lived in the Amish community for many years. 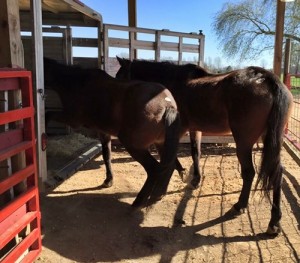 They both hopped in and went to the front together as if they were a team in harness. 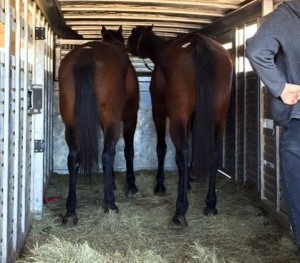 Tawnee got them tied and made sure they were comfortable before loading the others. 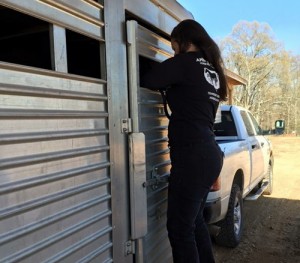 Next the little jack was getting ready to load.  He was happy to get out of his pen. 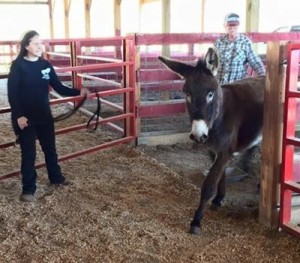 He wasn’t too happy to get into a trailer, but finally he hopped into his own divided section. 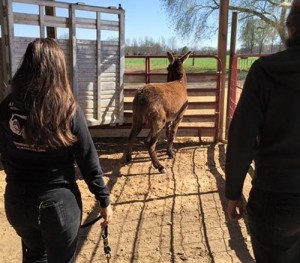 Last to load was the horse with the skin tag who was purchased so she wouldn’t be sent to slaughter. 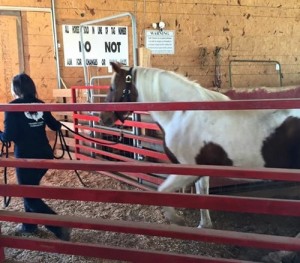 She was a very good girl getting in the trailer. 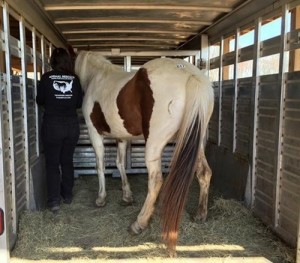 After the drive to the shelter, she was happy to get out and look around. 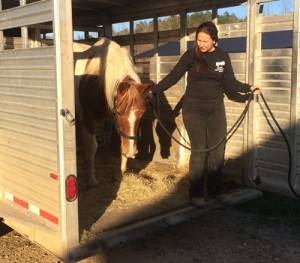 This is Daisy, she is an 8 year old non-gaited mare.  Her conformation is a little different, but she is a sweet girl, trained to ride, and neck reigns. 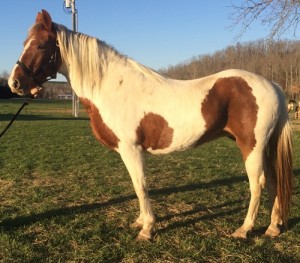 This is the skin tag on her nose.  We may be able to have it removed, it doesn’t seem to be bother her any. 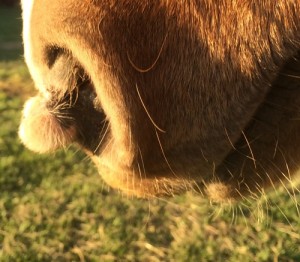 Next it was the little jack’s turn to get out of the trailer. 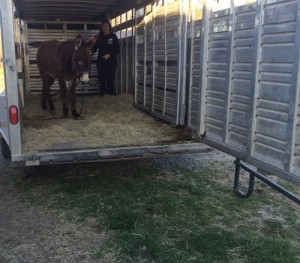 Thanks to our Facebook fans suggestions his name is Cash.  He will be gelded soon.  He is very cute. 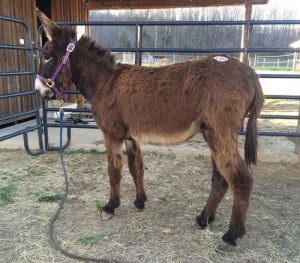 The Amish horses were at the front of the trailer and Tawnee asked them to back up.  The thing with these Amish horses is they don’t know English.  They know German or Pennsylvania Dutch.  Thankfully the cues are still the same.  They both started backing up the long 24′ trailer.  They are so well trained. 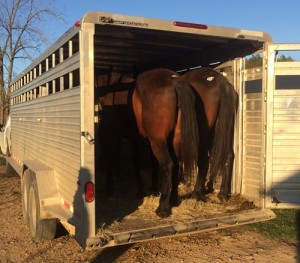 They are both very cute and attached to each other.  One of our volunteers commented when she saw them “Look, they have Amish haircuts.” 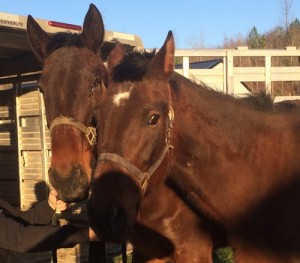 This is Grace, she is blind in one eye and is approximately 18 years old. 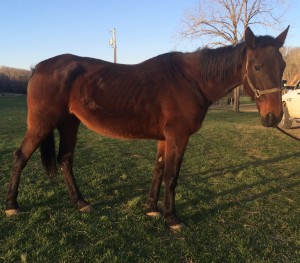 This is Nash, she is approximately 15 years old and very sweet. 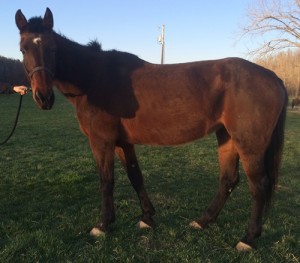 We would like to thank everyone who donated to make this rescue possible.  We will be rescuing more horses at auctions in Oklahoma this week.