Tennessee Shelter: The night of the auction

Saturday night I was at the Circle D Auction in the heart of Amish country in middle TN.  I’ve been to this auction several times, the first was on our exploratory trip to TN in 2014.  Back then the auction was owned by a different person who, oddly, seemed to be smitten with me and wanted to go into business partnership with me. I kept declining the offers, and finally he begged me to at least run the concession stand.  The whole time I kept thinking “If only you knew who I am, you wouldn’t be asking me!”  I did think “Wow, I sure could get a lot of inside knowledge of the slaughter pipeline in TN,” but I was heading back to CA and that wouldn’t be an option. 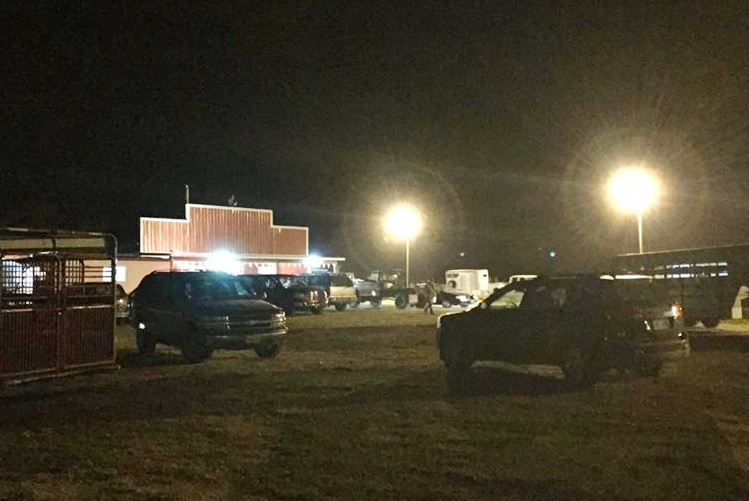 When I returned to TN to open a shelter, I attended the auction and found that it had new owners.  The previous owner had sold the auction to a couple, who knew nothing about who was buying the horses, or really anything about the horse auction business.  I was at the auction when the owner’s wife realized most of the horses were going to slaughter.  She was devastated when it sunk in that she was responsible for auctioning horses to their death. The buyers who came month after month, buying tons of horses, weren’t keeping them for their back pasture, they were kill buyers.  Since that time, they have tried to take steps to prevent kill buyers from buying at the auction, but since it is legal to buy and ship horses in TN, and it’s a public sale, there’s not much they can do.  It looks like they may be selling the auction again as they cannot deal with the stress of it all.

Saturday night when I walked to the office, I was greeted with a hug: “Horse Plus is here, we love you!”  What a different attitude than I am used to by auction staff! 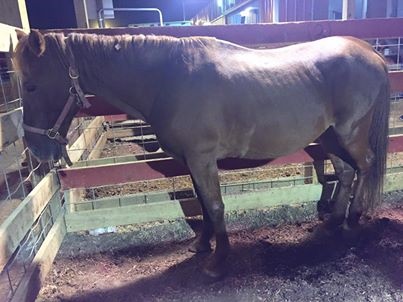 I confirmed with the auction owners that it would be OK to have our volunteer professional photographer take photos and video, and that I could do a live-stream on Facebook.  They gave me full permission to take all the media I wanted.

I went out to the holding pens and started live-streaming on Facebook.  To watch one of the videos, click here. 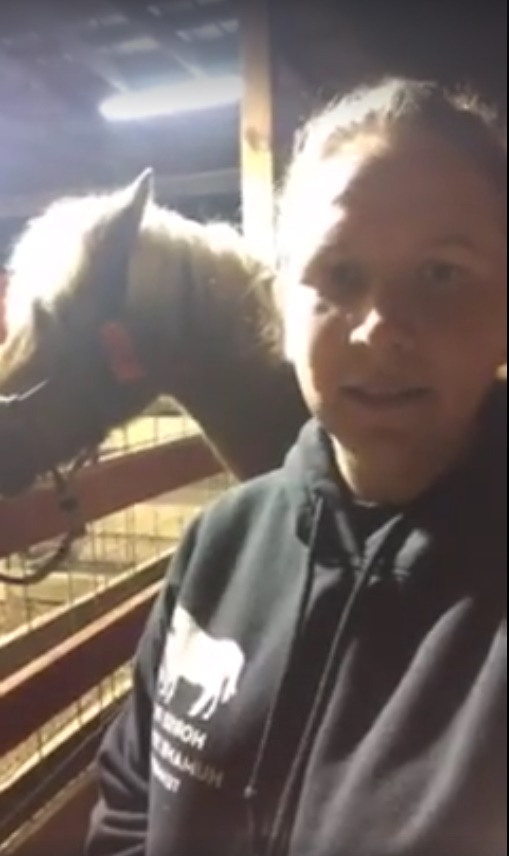 While I was doing the live-stream, I had a bit of a surprise.  A big lick trainer, who I purchased Gen’s Ice Glimmer (a sored TN Walking horse) from was there!  The USDA has been doing an investigation on this guy, and he instantly recognized me as I was wearing my Horse Plus sweater for the video and photos.  To say he was unhappy to see me would be a very serious understatement!  He kept glaring at me everywhere I went, and definitely trying to intimidate me.  Over the years, I’ve dealt with hostile kill buyers across the nation, and one big lick trainer wasn’t going to intimidate me, but he kept me on high alert! To watch the live-stream when I realized that the Big Lick guy was there, chick here and go the 10 minutes mark. 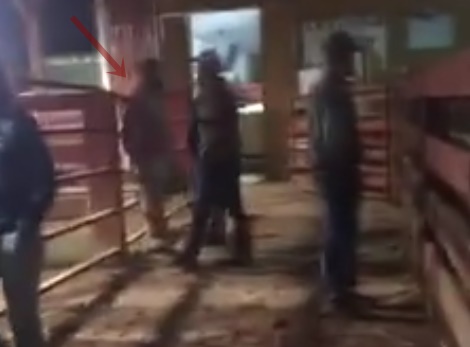 The auction began and Sara, the photographer, sat right down along the auction ring in the middle taking pictures.  I couldn’t help but smile, thinking “Wow, this would never happen at the CA auctions I’ve attended!”  The big lick trainer seemed very intimidated having a photographer taking pictures of everything, and soon drifted away and left. 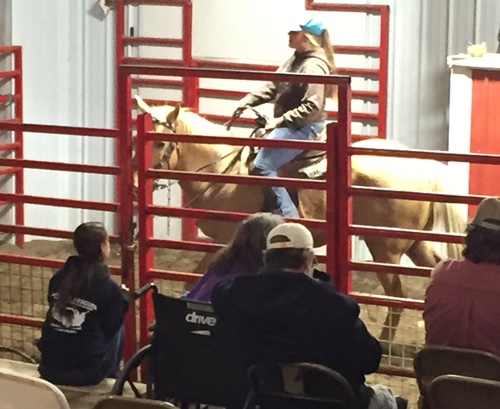 One by one the horses came through.  This auction is the heart of Amish country, and many Amish brought their horses and ponies to sell. 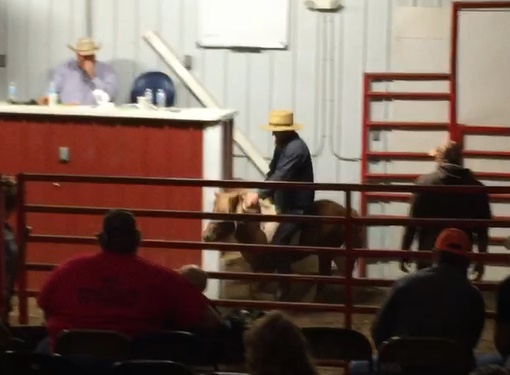 Sara kept taking pictures of everything.  I could be totally wrong, but I don’t think a professional photographer from an animal welfare organization has ever been allowed to freely document a horse auction. 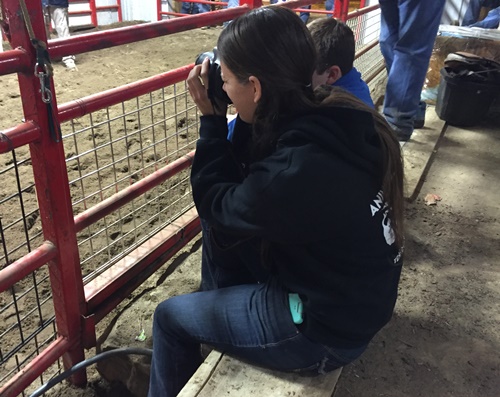 The photos she was taking were a great perspective and showed the emotions of the animals.  We did rescue this little donkey! 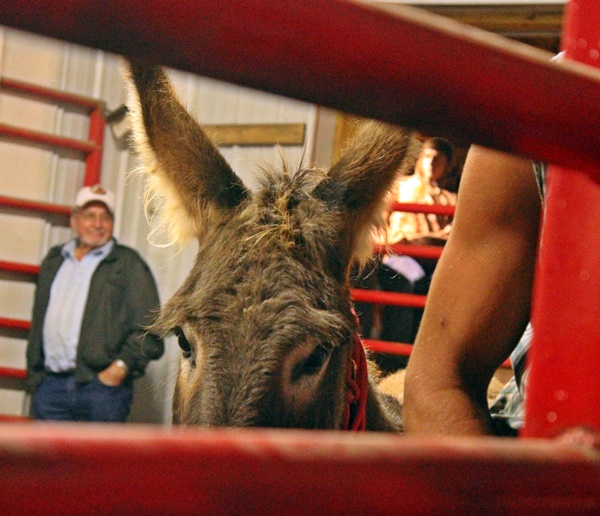 Look at the poor horse’s face.  I spent a lot of time with this horse before the auction, and I was very happy to win the bid.  There was only 1 kill buyer, and he was definitely getting distraught as I kept bidding on horse after horse. 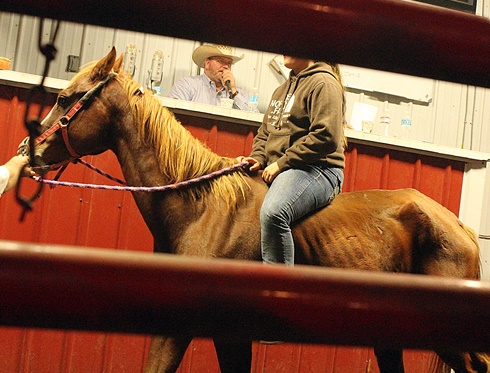 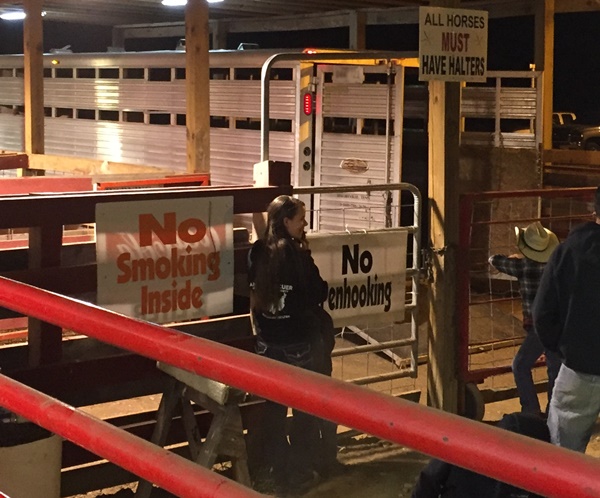 Unfortunately, the videos came out blurry since it was so dark, but the look of terror on the horses faces came through as they loaded up into the trailer for their ride to slaughter.  They can tell their new owner has no compassion.  They go from being riding horses and companions to nothing more than walking carcasses that will make their new owner some money. 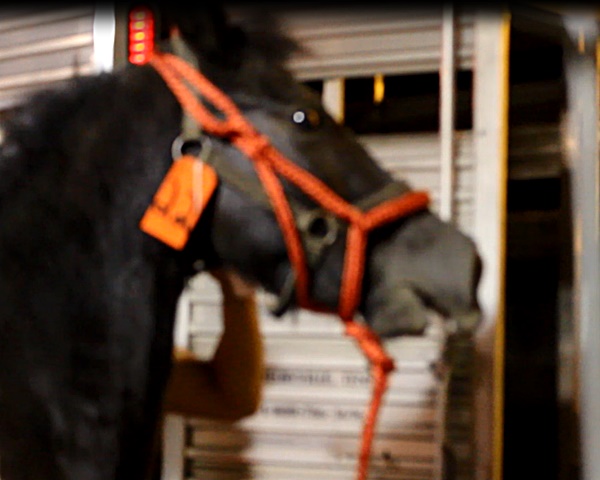 I stood right next to his trailer as he was loading up the last of his horses and live-streamed it onto Facebook.  To watch it, click here. 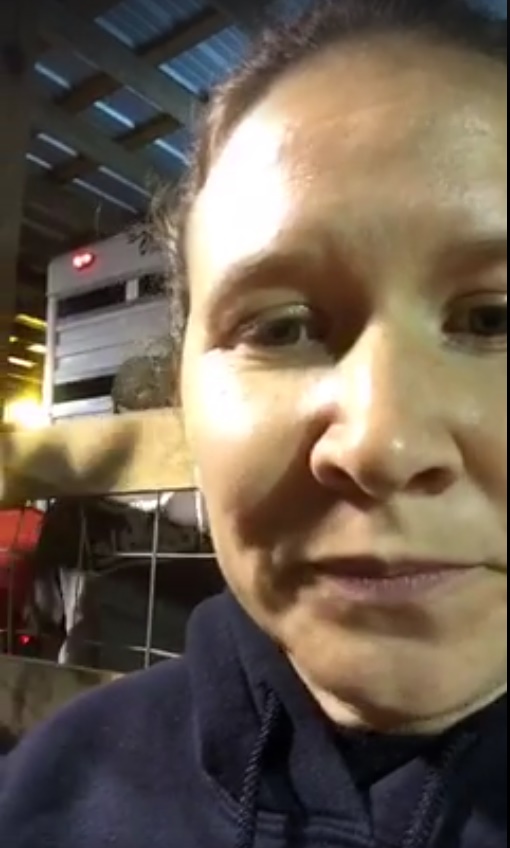 It always breaks my heart watching horses load onto kill trucks.  I was comforted knowing that 8 of those horses were safe thanks to your donations.  I went and hugged the poor skinny gelding who was ridden through the auction that I saved.  He would have been on that truck if it wasn’t for donations from people like you. 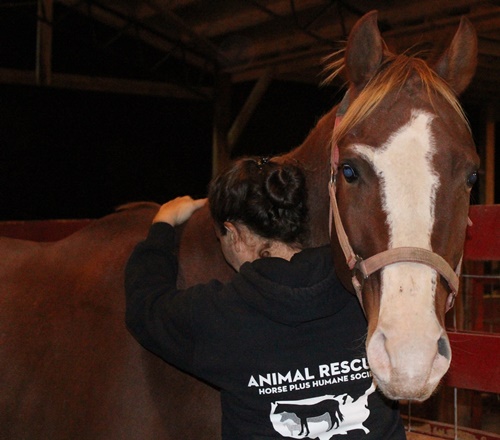 Sara went from pen to pen documenting the ones we saved. 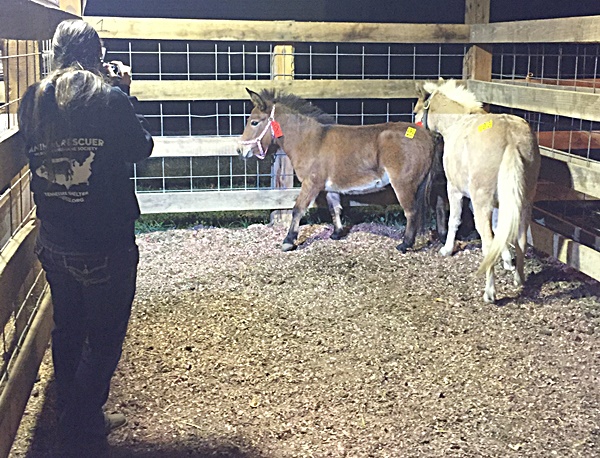 The auction owner came to me and told me there was another horse he didn’t want to send through the sale that came in.  I could have her for $150, so I paid $100 after talking him down.  I was able to take her too, which made a total of 9 saved that night!  I did a quick live stream asking people to step forward and cover her rescue costs and I’d like to thank everyone who did! To watch it – Click Here. 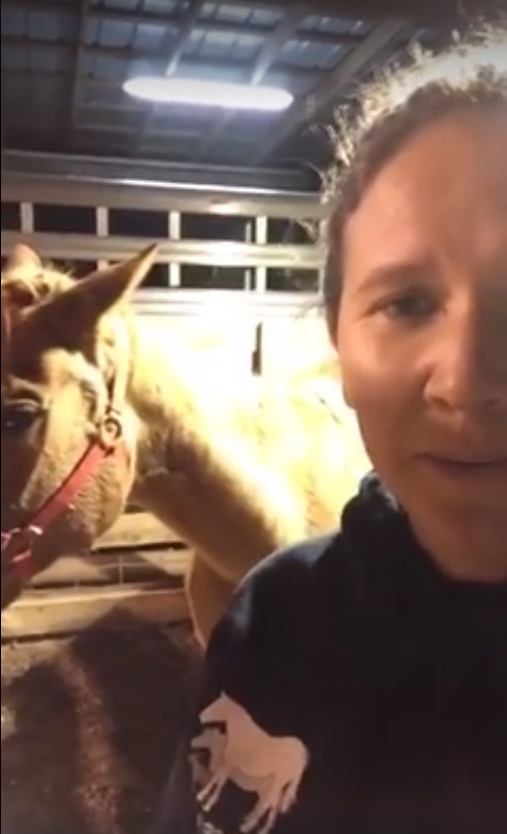 Finally all the precious lives were loaded up.  Each group went into their own compartment.  There was a TN Walking stallion in the front next to an in-tact jack donkey, and next to the donkey was the little mini stallion.  They all got along fine.  Next 3 horses went into the middle compartment, and the mini mules and mini mare in the last compartment. 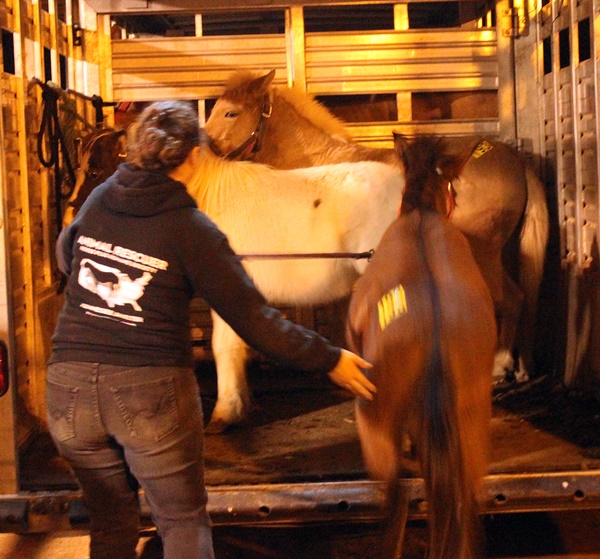 One last check to make sure they were all safe and comfortable then we headed to the TN shelter. 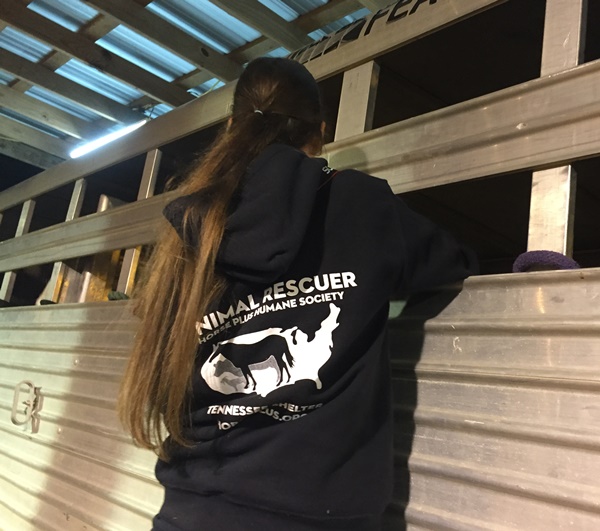 It was after 1:00 am when we were unloading.  I made sure they were all comfortable for their first night at the shelter. 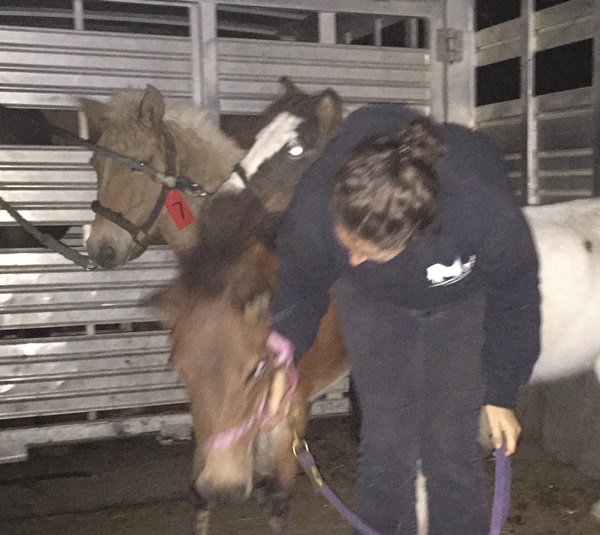 The next morning they were definitely settled in and making friends with their pasture mates. 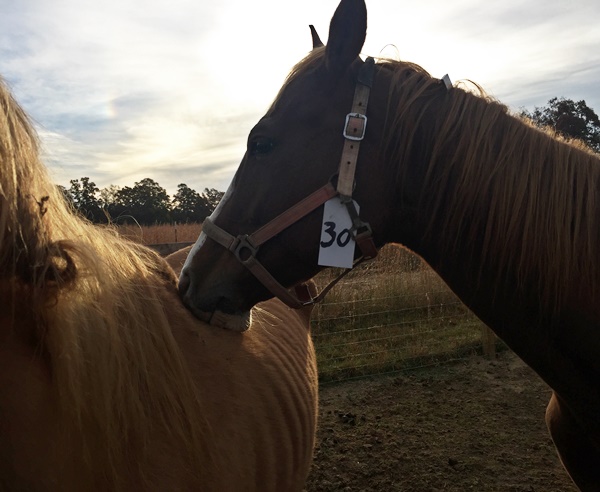 It is so cute seeing them bond with each other.  They have all been through so much, and to know they are safe and everything is OK must be a huge relief for them.  To read the blog that introduces each of them, click here. 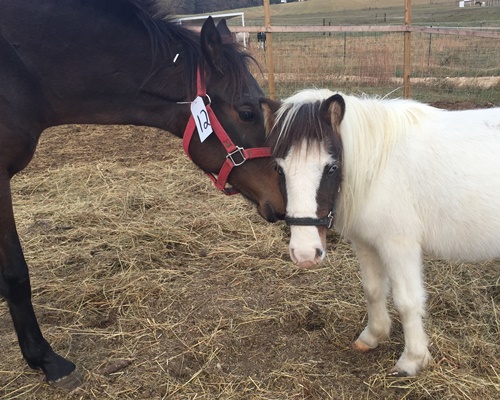 I would like to thank each and every person who stepped forward to help rescue these precious lives.  The same night I was rescuing in TN, our CA rescue team was at an auction in California.  A total of 12 lives were saved in 1 night across the United States!  We couldn’t do it without your support!

Our goal this month is to save 20 horses from the slaughter pipeline, and we are over half way to making that happen!  With your support we will make the life-changing difference for slaughter bound horses. 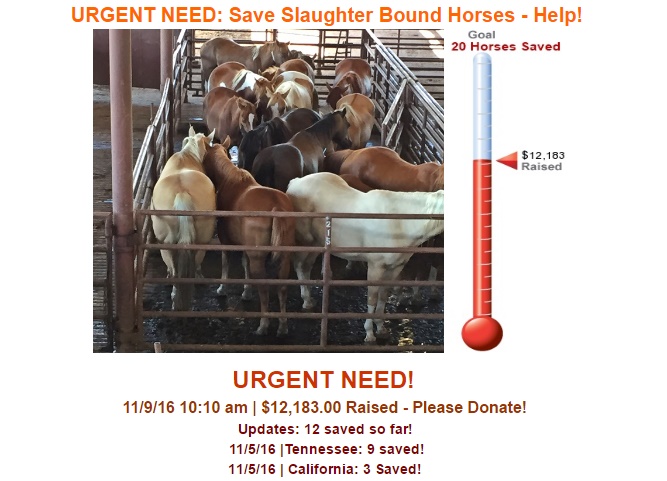